Brazilian forward Marta created history on Tuesday night in Valenciennes as she became the World Cup's all-time leading scorer for both men’s and women’s.

After scoring a penalty against the Matildas in Montpellier to equal with German Miroslav Klose, who was on 16, another penalty in Brazil’s 1-0 win over Italy saw her move ahead of the 2014 World Cup winner.

During her celebration, she kissed her boot where she sports a pink and blue symbol to represent equality.

Speaking to press after the game after being awarded the Player of the Match, Marta said that the World Cup is a platform to spread the message of equality for all.

“Without question, this is a big opportunity that we have here,” she said.

“We can use this platform to push for more support for equality.

“This isn’t news, this is business as usual but we try to represent and show how much women can play any type of role.

“It's not only South America, not only Brazil and all of our squad but all the other teams represented here as well and there are many other women playing different roles.

“Let me make this clear, it’s not only in sports, but this is also a struggle for equality across the board.”

During the match, Marta also sported a dark coloured lip but the 33-year-old has not revealed the meaning behind the decision yet.

“Nobody asked about my lipstick, social media is blowing up with it, nobody asks me about it here,” she said.

While FIFA has increased the prize money pool for 2019 compared to Canada four years ago, it is still well short of the 315 million awarded in Russia last year. The winners in France will receive just $4 million, half the amount men's teams were awarded despite being eliminated in the group stage.

Brazil finished third on goal difference in Group C and will likely come up against hosts France. 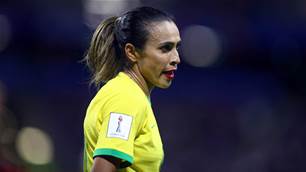 'The game depends on you to survive'