Four debutants have been selected in Jason Hetherington's 18-player Queensland Maroons squad for the Women's State of Origin.

Jessika Elliston, Amber Pilley, Stephanie Mooka and Elle Stitt will be the fresh faces and hoping to make their debut in maroon.

In more good news for the side, Rona Peters has also been named in the squad.

The former Kiwi Fern was originally deemed to be ineligible to play in Origin due to her previously representing New Zealand but after successfully applying for a review of her eligibility she gets to represent her new adopted home again. 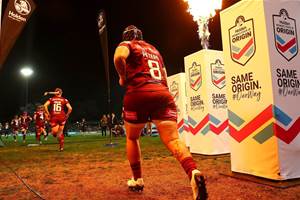 No more Kiwis in Women's State of Origin

Three New Zealanders will not take to North Sydney Oval for the Women's State of Origin next month.

Jennie-Sue Hoepper and Chelsea Lenarduzzi have been recalled from the side after missing out on selection last year with the duo playing for Queensland prior in 2017.

The Women's State of Origin will take place on Friday, June 21 at North Sydney Oval.