The Collingwood Magpies have lifted the inaugural Suncorp #TeamGirls Cup trophy with a 39-33 win over the Melbourne Vixens.

“It’s very nice to be bringing something back to the Holden Centre to put it in the trophy cabinet,” she said.

“This tournament has been fantastic, it’s been a really good test for us to see where we’re at against the best in the competition – this is just the start and part of the building blocks with seven weeks of pre-season to go."

We’ve done it! Magpies win the #TeamGirlsCup by 6 points in a blockbuster match. Final score 33 - 39. Incredible effort from @MelbourneVixens who kept us on our toes. We’ll see you again in round 1! pic.twitter.com/v6H6NXUzxO

After an off-season with a host of player movements, the Suncorp #TeamGirls Cup was a much needed hit out for many teams ahead on the Suncorp Super Netball season.

The Magpies, who had gained the services of Geva Mentor and Shimona Nelson in attack, came out of their pool matches with two wins before a loss in their final match against GIANTS Netball to finish on top of their pool ladder.

This set up a tantalising Melbourne derby final after the Vixens went through their pool undefeated.

The Vixens took an early lead, scoring 13 goals in the opening two quarters but their crosstown rivals were relentless and managed to fight their way back into the match, trailing by just three at halftime.

The break was not what the Vixens needed, as it stifled any momentum they had left.

Mentor and Nelson continued to impress for their new side with the later scoring 35 goals to ultimately give the Magpies the win and was named the Most Valuable Player in the Grand Final. 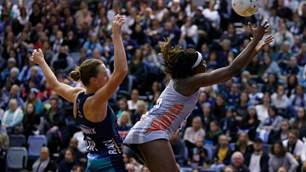