Ellie Carpenter and Mary Fowler have continued to make history when they were both named to ESPN FC’s list of the best 21 female players under 21.

The two young women have been plying their trade this last year in France, both playing for clubs in the Division 1.

Eighteen year old Fowler is currently with Montpellier HSC, having joined the club in 2020.   The youngest member of the 2019 Matildas World Cup squad, only sixteen at the time, Fowler had previously played for Adelaide United in the W-League.

Cited for her attacking prowess, this young striker scored five goals and an assist this past season in her twenty-two total games played so far.

The ranking is especially impressive as Carpenter is the only defender to make the top ten list almost completely dominated by forwards.

This striker domination is due to the fact that compared to defence, which takes more tactical awareness and understanding of the game to master, young forwards generally get more playing time.

Playing time is not something that has been in short supply though for Carpenter this past season. Her first with l’OL, she has started seventeen league matches, one domestic cup match and five champions leagues matches for her star-packed Lyonnais club, netting one goal in the process.

Since her arrival with the club last year, she has won one Coupe de France and the 2019-20 UEFA Champions League.

Olympic Lyonnais and Montpellier are currently sitting in second and fifth place respectively in Division 1.  With one match to go Lyon are one point behind leaders Paris Saint-Germain and have assured themselves qualification to the 2021-22 Champions League.   Montpellier has missed out on a possible Champions League qualification spot but is far above the relegation boundary.

Both are vying for a spot in the eighteen person Tokyo Olympic squad.  The Matildas next meet up to play Denmark on the 11th of June and Sweden on the 15th of June in preparation for this summer’s tournament. 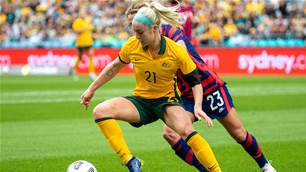