While 2020/21 has so far produced only one win and a draw in six games, the future is well and truly bright for the Western Sydney Wanderers W-League team.

Last weekend’s exciting 2-2 draw with Adelaide epitomised what Wanderers' fans have to look forward to.

Matos (80 touches) and Hunter in particular were both superb, with the latter scoring a well earned double in just her third W-League game to secure a valuable point.

Matos, Middleton and Chauvet come from the famed Illawarra Stingrays NPLW program, a club where Wanderers' legends Erica Halloway and Caitlin Cooper ply their trade in the off-season.

Matos and Middleton are close friends and both are in their second season at Wanderland. The duo not only made their W-League debuts last year, but they got a taste of finals action.

Both Matos and Middleton have played four games this year, and while they don't have the star power of last year around them, they are part of the younger brigade that coach Dean Heffernan will be building his midfield around.

Matos, 21, loves to play hard, never afraid to take on an opponent in defence or attack, she wins the majority of her duels and is especially prominent in aerial contests (winning 57% of them).

While she has started the season well, she insists there is still more to be done.

"I'd like to develop even more as a player and try to play as many games as possible in the Red & Black jersey.”

She admits the experience of playing finals last year whet her appetite for more.

"I'd love to see us make semi finals again and go that step forward to make it to the final and make even more history for the club," she said. "I learnt so much from all the players around me and everyone was so supportive.”

Blessed with speed and a willingness to put her head down and run, Middleton will be looking to provide the Wanderers' attack with zip down the wings and up the middle.

The distinctive red hair ribbon makes her stand out on the pitch, and the 24-year-old will be looking to draw more attention with her on-field performances.

Of the Stingray trio, tough defender Chauvet has perhaps been the most impressive this year, showing she has what it takes to challenge the best forwards in the game.

She played every minute of the opening four games before missing Round Five against Canberra and last weekend’s game against Adelaide.

Her numbers speak for themselves with the 18-year-old chalking up over 60 touches a game, averaging 54 passes at 76% accuracy, totalling 21 clearances, 11 interceptions and 11 tackles in what has been an impressive start to her career.

Chauvet's ability to put her body on the line and tough out games, despite her young body copping plenty of punishment, has already made her a fan favourite with the Red & Black army. In the season opener against Sydney, she battled severe cramp but managed to play out the game.

She admits she has enjoyed the step up to the W-League level and the elite environment it brings.

"I'm really grateful for the opportunity to have started the first four games this season," she said. "I've enjoyed being a part of a professional team and playing with and against quality players.

“It's been so much fun to be able to play at such a high level and I'm excited to keep improving."

As for having her Illawarra team-mates with her, she admits it has been a blessing.

"Having Chloe, Danika, Caitlin and Olivia (Price) on the pitch made it easier for me to play because we've played with each other all year and we know how each other plays.

“It's been great to have their support and advice this season."

Young Matilda duo Henry and Keane will be a red-hot combination for the Wander Women going forward. They scored a sizzling 16 goals between them in a curtailed 2020 NPLW season, and will be key players if the Wanderers are to hit the back of the net more regularly in the second half of the season.

Hailing from Penrith, Henry was born to play in the Red & Black, with Wanderers' assistant coach and club legend Cath Cannulli labelling her as a star of the future.

Henry admits she sometimes pinches herself that she is playing for her childhood club.

“I grew up here my whole life, and the Wanderers is in my backyard, so it’s just crazy to be here,” said Henry. “My goal is to stay in the starting team and get as many minutes as I can.”

The talented forward was also part of the Women's Talent Identification Camp in Canberra last November. She has only started one game this season and been a substitute four times, but expect to see more game time for the 17-year-old in the run home as the Wanderers look for more avenues to goal.

Keane, 18, may be baby-faced but in front of goal she is a menace. In the last five years in the NPLW she has netted 61 goals from the under 15s through to the seniors.

With only 18 minutes of game time so far this campaign from two substitute appearances, Wanderer's fans have yet to see what she has to offer, but along with Henry will be sure to provide plenty of excitement in the coming months.

Super-sub Gomez came off the bench in the first five games this season, often coming on late to take on tiring opposition, the 18-year-old is a player who will have a bigger role to play as the season goes on.

She is full of praise for the coaching group at Wanderland, whom she feels have embraced her as as begins her career.

“Yeah the coaches are amazing, I’ve never met coaches as nice as them, very helpful and everything is awesome,” she said.

Along with Gomez, 17-year-old Hunter will see more game time in the second half of the season particularly after her all-round performance against Adelaide.

The talented midfielder only made her starting debut against Canberra in Round Five, and she admits last Sunday was the culmination of hard work and persistence as well as plenty of faith from the coaching staff.

“I’ve had a few injuries so it’s been great to get back out here. I have to give credit to the coaches, who are the best coaches I have ever had.

“Also my team-mates. The combination we had against Adelaide has been something we have worked on hard at training.”

While last season saw star power drive the Wanderers, 2020/21 is about the youngsters who have been given the opportunity to carve out their own name as the Wander Women look to build for the future.

The next step will be tonight at Marconi Stadium when star studded Brisbane Roar come to town. The game will be a big test for the magnificent seven, who will come up against a bunch of current day Matildas. Kick-off is at 7.05pm. 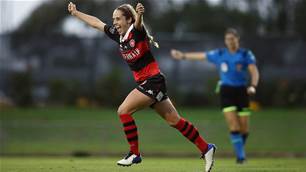 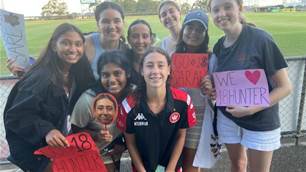 Teen steals the show in Wanderers and Adelaide thriller 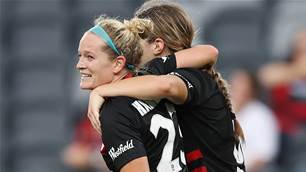 'I'd love to be back at Wanderland,' says Julie Dolan Medallist