New Bristol City signing Chloe Logarzo has insisted that the departure of several key Matildas to Europe will be good for Australia overall.

The swift departures of Hayley Raso, Caitlin Foord and Chloe Logarzo over the past two weeks sent shockwaves through the W-League, which has lost the brunt of its stars this season.

The latest trio join Sam Kerr, Jacynta Galabadaarachchi, Emily Gielnik and Alex Chidiac in plying their trade in Europe, which has decimated the W-League's stocks of Matildas household names

The departures also come in a season where, despite record amounts of media exposure, W-League audiences have continued to decline.

But Logarzo believes the transition period will be good for the league, as it will further the development of the Matildas and lead to a new golden age of Australian female football.

"I've only spent the last couple of years actually playing overseas and I think the W-League was vital for me to be able to grow as a player," Logarzo said.

"I was fortunate enough to be able to have some really amazing coaches coming through.

"It's a stepping stone for younger athletes and girls to be able to develop to then go on.

"Yes, it might be taking a hit, but it just means that our homegrown talent has an extra chance to be able to step up and do something better and hopefully it will grow the game as well."

Logarzo says that her move was based on accumulating as much international experience as possible before the Tokyo Olympics and the next World Cup cycle.

"It was definitely just being able to get as many games as I possibly can under my belt in the lead up to the Olympics.

"Being able to go to a league that's definitely new to me and England's coming through the ranks and they're doing really well.

"It's going to be a good test for me as well and I'll be able to help Bristol as well, go in and hopefully give them the ignition that they need to be able to fire through the rest of the league.

"So I'm really looking forward to being able to come in and have that mature role and responsibility for Bristol and hopefully lift them for the rest of the season." 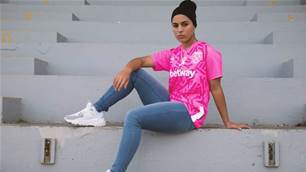