Sam Kerr has detailed the struggles she's faced fitting into the Chelsea team, given her constant travel, the COVID-19 pandemic, and the hardships of settling into South London.

Speaking to Chelsea football club, Kerr said that her main ambition now is to gel with her teammates on and off the pitch, to help with both her professional and personal transition.

"Whenever you go to any new club – even when I changed from Sky Blue to Chicago – it’s hard," she explained. "Changing cities, changing teams, living in a new, foreign place. That’s always the hardest part for me – settling off field and playing well on the field.

"When I first got there [Chelsea] I was sick, then I travelled back home for the Olympic qualifiers, then that got extended because of all this stuff that’s going on, then back home for 12 days, then back here.

"So I actually haven’t been there [Chelsea] that much, but I’ve been enjoying it, and I’m looking forward to getting home to really dig my heels in and get amongst it.

"It’s going to be a challenge to make the starting team rather than just rock up every day and play on the weekend and not have to train well.

Fellow Chelsea striker England, who has launched an incredible run of goalscoring form since Kerr arrived, admitted recently that the Australian's arrival had made her a better player.

Now, with the Matildas two pre-Olympic friendlies against Canada and the USA cancelled due to the COVID-19 outbreak, Kerr has the opportunity to truly settle into her new life in England.

The always frank and honest Matilda took a moment to reflect on just how momentous her rise in world football has been, from just eight goals for her country in 2016, to being within five goals of the Matildas all-time record (Lisa De Vanna's 47) four years later.

"When you’ve only scored eight goals you don’t imagine yourself scoring five times that in the next four years," Kerr said.

"I'm really proud of the work I’ve done to get here, and I think, going forward to these Olympics, it just shows how far the team has come.

"I don’t score any of those goals alone, so for me it’s about how the Matildas have come as a team and really there’s no pressure on myself to keep scoring. It’s about the team performing, and the goals will come whether it’s me or any of the other forwards or midfielders.

"I just hope it keeps going forward, and I feel really lucky that I’m living in this time now because there’s a lot of retired players who kind of see what we’re going through at the moment, and, you know, that’s what they hoped for.

"I know they’re happy that the female game is reaping the rewards for all the work they’ve done, so I feel really lucky living in this time, but there’s still so much work to go." 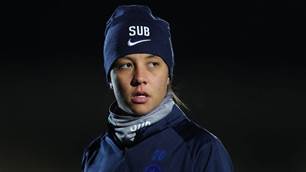