Nikolai Topor-Stanley and Clare Wheeler were the key winners as Newcastle Jets celebrated their Player of the Year Awards in a ceremony at Newcastle’s City Hall this evening.

Topor-Stanley took out out the A-League Player of the Year and the Ray Baartz Medal after the vice-captain played every minute of every game across the A-League, AFC Champions League and the FFA Cup.

It’s the second time he has been named Player of the Year, taking home the award in 2010/11 during his first stint with the club – the first outfield player in Jets history to win the award twice.

Topor-Stanley’s feats were matched by Clare Wheeler in the Westfield W-League, with the tireless midfielder taking out the Player of the Year and the Cheryl Salisbury Dedication Award for the second consecutive year.

Golden Boots Roy O’Donovan (11 goals) and Cortnee Vine (4 goals) were acknowledged for their feats in front of goal, as they topped the goal scoring charts in their respective squads.

Vine also took out Goal of the Year in the Westfield W-League courtesy of a stunning strike against Canberra United in Round 3, while a Dimi Petratos bomb against Melbourne Victory in Round 21 topped voting in the A-League.

Club Members picked Britt Eckerstrom and Glen Moss as their Players of the Year after some exceptional performances between the sticks.

Moss also picked up the Community Player of the Year Award for his dedication to and involvement with the next generation of footballers within the Jets ranks.

“Nights like tonight are a great reminder of why being part of football, and a club like the Jets is so enjoyable,” McKinna said.

“It’s not often you’re able to get everyone together in this sort of setting, from sponsors to Members to volunteers, the people who support us day in and day out – they’re all such a valued part of our club.

“I’d like to congratulate all of tonight’s winners on their efforts throughout the year.

“We’ve got a fantastic crop of players in both our Hyundai A-League and Westfield W-League squads.

“Nikolai and Clare are deserving Player of the Year winners and are both wonderful representatives for this club and city of Newcastle on a national stage.” 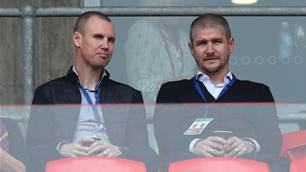 Newcastle director’s mad escape: ‘The team were at rock bottom’