The Matildas vice-captain rolled her ankle in fairly innocuous circumstances at training. Medics found Van Egmond has suffered a badly sprained ankle, in addition to some suspected ligament damage.

Assessments are still being carried out on the midfielder, but at this early stage she is set to be sidelined for the next six weeks – ruling her out of the remainder of the Jets 2018/19 campaign.

The club has already been in contact with the Matildas' medical team and will work closely with them to ensure van Egmond is ready for the national team ahead of June's 2019 WWC in France.

Coach Craig Deans said he was disappointed to lose his captain for the remainder of the season.

“It’s hard to lose any player, even more so when it’s someone of Emily’s quality,” Deans said.
“She loves leading this team and representing her town and this club – she’ll be devastated to miss the rest of the season.

“Obviously this is a massive year for the Matildas, so now our focus is helping Em get back to full fitness as quickly as possible for the Cup of Nations and then the World Cup.

“We’ve already begun that work with the Matildas medical team and W-League Physiotherapist, Bronwyn Vaughn does a fantastic job – Em is in good hands.

“It’s just been one of those seasons for us. We can’t take a trick when it comes to injuries, but now it gives some of the younger girls a great opportunity to gain some experience in the W-League. 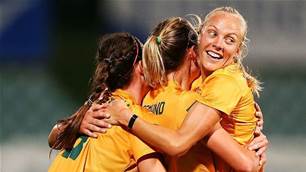 As Brock departs, Matildas trio expected to be next