Newcastle Jets are set to focus on developing homegrown talent with Americans Britt Eckerstrom and Katie Stengel not returning to the club next season.

Coach Craig Deans confirmed to the Newcastle Herald that the two players would not be returning to the W-League club.

Eckerstrom was one of the teams best last season while Stengel was Newcastle's leading scorer in 2017/18 which helped the Jets break their finals drought.

Unfortunately, Stengel suffered a stress fracture in her foot and missed the second half of 2018/19.

Taylor Smith will also not return after she tore her ACL last season and misses the NWSL season through rehab. There could be some positives for Jets fans though with defender Arin Wright a possible chance of returning.

"Britt is not coming back," Deans said.

"Katie won't be back as well and Taylor is obviously injured. Gilly wants to come back but it depends on what the budget is."

However, one player didn't seem to know she wasn't returning.

Ha well that’s news to me but good luck to the jets this upcoming season. Sucks to not be good enough for them anymore ✌🏽

Due to the Jets current financial situation, they won't have an A-League marquee next season because of owner Martin Lee's business challenges.

Potential budget cuts for the W-League side could affect the number of international players with the club paying the cost of airfares, accommodation, visas, transport and insurance. 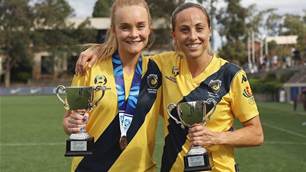