A dominant second half display has seen Newcastle Jets secure all three points in a 3-1 upset win against high flying Perth Glory.

This period of controlled play was short lived though, and Newcastle nearly equalised in the 40th minute. Tamplin rolled a dangerous cross along the six-yard box and only a superb reaction save from Campbell prevented Jenna Kingsley from scoring.

The second half started off with a change for Glory with Liana Cook coming for Jacynta Galabadaarachchi and Cook nearly helped double Glory’s lead when she crossed to Kerr in the 46th minute, but Jets goalkeeper Britt Eckerstrom was able to save the Glory superstars header.

In the 47th minute, a storming run from Newcastle's Hannah Brewer took her to the edge of the Glory box where she played a neat one-two with Tara Andrews, but her final shot was just wide.

This signaled a period of almost complete dominance from the home side, who were quicker to the ball than their opponents and were prepared to run at their opposition.

By contrast, Glory were unable to put more than 2 or more passes together and found that their usual outlets of Hill and Kerr were being superbly marshalled by the Newcastle defence.

Simon and Arin Wright were bossing the show in midfield, switching the play extremely effectively, and putting Glory under enormous pressure. Despite the pressure though, Glory's defence was just about holding out, but they were unable to do anything to prevent the equaliser in the 56th minute, when Wright's stunning left foot strike from outside the box gave Glory goalkeeper Campbell no chance.

The Jets were flying now and they continued to apply pressure as they went searching for a second goal. Their momentum was halted for a period though when a nasty clash of heads in the 58th minute between Libby Copus-Brown and Cook saw the Newcastle player substituted for Cortnee Vine.

The Jets were back on the offensive after the injury delay, and finally took the lead in the 63rd minute, when Andrews found time and space in the box to get a shot off. It deflected off Campbell and Katie Naughton before finding its way into the back of the net.

The Jets nearly went 3-1 up in the 66th minute when Vine let fly again, only for Campbell to make the save.

Glory were not prepared to throw the towel in though, and Eckerstrom had to be at her very best to stop Kerr scoring her second of the game when she made a big save in the 85th minute.

There was another chance for Glory in the first minute of added time but substitute Lexi Moreno’s half volley flashed just past the post.

The game was finally sealed in injury time, when Vine worked her way into the Glory penalty area and finished with real authority to make the final score 3-1 to the home team.

What a result for the Jets!

This goal throws another curveball into the #WLeague title race. 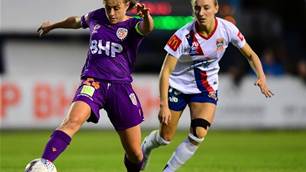