While the Reggae Girlz are yet to claim any points in Group C they are heading into the clash against the Matildas with a strong belief in their ability to win.

It is the first World Cup the Reggae Girlz have qualified for and they are out to make a name for themselves on the world stage.

As it stands the team still has an outside chance of making it out of the group stage, however coach Hue Menzies is more focused on results than probabilities.

“We want to qualify, it’s what we’re here for. Obviously, it’s a mathematical deal that way, how to get through. I haven’t kept up with it, I just go into games thinking we need to get results, especially if we play the way we are capable of playing we should be able to get some results,” he told media at a pre-match press conference.

When asked what he believed would be necessary for his team to beat the Matildas, Menzies simply replied: “score goals”.

However, he admitted that his team has been struggling in the final third, with recent training sessions concentrating on finishing.

“Hopefully we can redeem ourselves. We had some early chances in the game against Italy, we just squandered them away, it’s something that we’re very much aware of,” Menzies said.

Another thing that he is very much aware of is the threat posed by Sam Kerr and the Matildas outside backs.

“I voted for Sam Kerr as the best player in the world, I have huge respect for her. Their outside backs are pretty lethal; they probably lead the world cup in crosses. Obviously, they play down the flanks and we have to deal with that,” he said.

Despite acknowledging the strengths of the Australian side Menzies said his side isn’t afraid.

“We have a lot of respect for Australia, we don’t fear them… our medium reaction is let’s take care if the boxes and then let’s see what the game gives us.”

“I know one of them, Kennedy, because I’m from Orlando and I know how she plays. So we feel like we can match up on aspects of it, we just have to deal with the other side if things and hopefully we can balance things out on our end.” 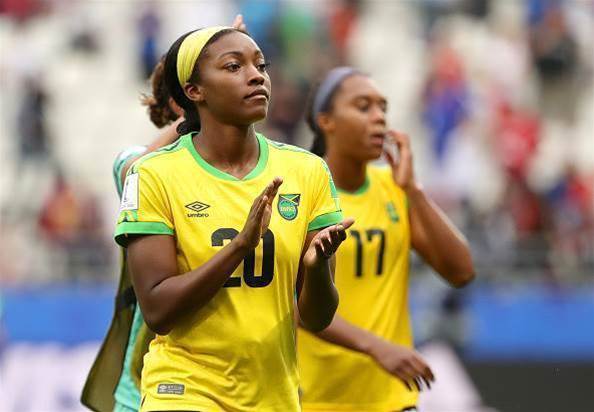 “I really respect her as a player, she works hard and is pretty unpredictable so I’m excited to see how our team kind of matches up with her specifically. Maybe we’ll trade jerseys or something. I don’t know- depends on how I feel after the game.”

While it remains to be seen how Matthews will be feeling after the game the pre-match atmosphere in camp has been good.

“Everyone is hungry, I think a lot of people probably would have assumed that we’d hang our heads, obviously we are disappointed with the results that we’ve had and not being able to put any away yet but the vibe in the locker room is that we have a pinpoint focus now,"she said.

"We come into every game feeling like we can compete and I think that’s what got this team where we are now, it’s just that confidence.”

“They’re a resilient group and I’m really proud of them, we’ve just got to go out there and perform the way we’re capable of performing.”

Jamaica faces the Matildas on June 18 (June 19, 5am AEST) at Stade des Alpes. Catch it LIVE on SBS and Optus Sport.