The Australian Diamonds are through to the 2019 Netball World Cup after a close and tense semi-final with South Africa.

The reign Champions came away with a 55-53 victory in front of an excited and loud crowd in Liverpool.

"That is amazing, it wasn't pretty but a win is a win and we go again and we are so excited," Player of the Match Liz Watson said.

A great quarter by South Africa has got them back in it as Australia go to the last quarter with a four point lead.

Australia came into the semi-final looking to have the chance to defend their World Cup title, while South Africa was playing in their first-ever semi-final at the tournament.

It was a tight opening quarter with both sides playing quite a defensive game to try force those turnovers. However, neither side was giving an inch in a physical and tense battle.

The Diamonds eventually were able to capitalise on a held ball from South Africa to give them a four-goal lead after the first quarter.

With the second quarter going much the same as the first, except with a bit more physicality, the Diamonds extended their lead to eight by the main break.

Australia was shooting at 100 per cent with Gretel Tippett being found more easily in the circle compared to teammate Caitlin Thwaites. But South Africa was right up there too with just one missed goal.

The difference proved to be in the turnovers and penalties causing issues for the Proteas.

However, the third quarter saw South African come out and put the pressure back on the world No.1's. The Proteas made three gains from intercepts, closing the gap back to four goals and outshooting Australia in a quarter for just the third time this World Cup.

Diamonds coach Lisa Alexander made two changes, which unfortunately would not have the impact that was expected, with Steph Wood coming in for Tippett and Courtney Bruce in for Sarah Klau.

South Africa gave Australian fans a number of tense moments as they came within a goal twice in the last quarter.

At the attacking end, Wood was not backing herself in the circle and was choosing to make the challenging pass to Thwaites a number of times. Thwaites played a mammoth role in her side advancing to the final, not missing a single attempt in her 30 goals.

Wood with the clutch shot to put it away for the Diamonds.

It was a tense finish to the match, one which could be felt across the arena with fans asking: Could South Africa find the turnover they needed? Unfortunately, it wasn't meant to be.

While Australia came away with the win, a small concern is that for the second consecutive game the Diamonds lost the second half just as they did against New Zealand.

The Final will take place on Monday morning 2am (AEST) with Australia facing either England or New Zealand. 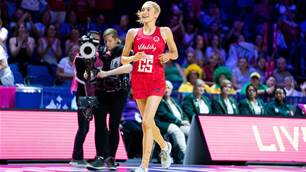