Veteran striker Kyah Simon was on World Cup standby but will now leave the Matildas camp after a hamstring injury recurrence.

Luckless striker Kyah Simon is leaving the Matildas' World Cup training camp after suffering a recurrence of a hamstring injury.

Simon was a slightly controversial omission from coach Ante Milicis' World Cup squad due to lack of playing time through injury, but she was in their training camp in Antalya, Turkey as a standby player.

A veteran of 87 matches for Australia since 2007, she will return to her US club Houston Dash to continue her rehab after this latest blow.

This is an unfortunate setback for Kyah," Milicic said.

"Kyah has worked hard this week and shown a lot of positivity around the group."

"We will continue to monitor her progress and hope she can return to the pitch soon to put her best foot forward ahead of our (2020) Olympic Games campaign." 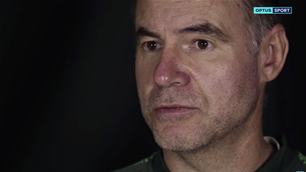 Milicic: I am sick of being an underdog...

States face off over Home of the Matildas