Young Indigenous footballer Shadeene (Shay) Evans has officially been named vice-captain of the Young Matildas ahead of the AFC U-19 Women's Championships in Thailand.

The 18-year old becomes the third Indigenous footballer in history to be named apart of the captaincy for the Young Matildas, following in the footsteps of Matildas legends Lydia Williams and Kyah Simon.

She takes her place next to captain Karly Roestbakken and is the first footballer from Borolloola, Northern Territory to play for Australia since John Moriarty 56 years ago.

"Shay leads by example," said Blayney. "[She's] highly respected by players and staff and is a great role model."

Evans has been apart of the John Moriarty Foundation (JMF) since the age of ten, participating in its football program in her home town of Borroloola. Last year, Evans debuted for the Young Matildas, scoring her first goal for her country in April.

She is currently signed to W-League club, Sydney FC and made her debut in the Sydney Derby against Western Sydney Wanderers in January of this year.

John Moriarty has played a massive role in Evans' development as a footballer and sees her as another role model for Indigenous youth in Australia.

"We're so proud of her achievements on and off the field," Moriarty said. "The way she counduts herself is credit to her and being named Vice-Captain is a reward for her, and another example of the role model she has become for some many young footballers.

"There is so much talent in Indigenous communities and Shay is an example of how much young players can achieve when given an opportunity."

The Young Matildas travel to Thailand next Monday with their first game scheduled against DPR Korea in the team's first match in Group A on Sunday 27th October.

Their other group matches are against hosts Thailand on October 30th and Vietnam on November 2nd. 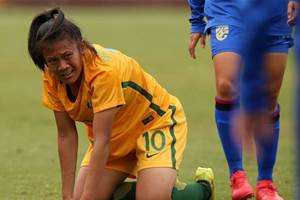