Arsenal are currently flying in the FA Women’s Super League and have won all seven of their games this season comprehensively, with 34 goals to their name.

It is Montemurro’s second year in charge after guiding the Gunners to third last season and has already won the 2018 WSL Continental Cup and Toulouse International Ladies Cup.

The 49-year-old was involved in two Melbourne City W-League titles as well as guiding Melbourne Victory to a Grand Final in 2014.

But it wasn’t always smooth sailing for Pepe, who recalls juggling a number of odd jobs to support his wife and kids while getting his coaching qualifications.

“We’re in a profession where it’s very difficult to sometimes get to that professional level and achieve those goals,” Montemurro told The Women’s Game.

“I found myself coaching at three schools during the day. I’d be doing school jobs from 7-8am, then going to another job from 10-12 and then in the afternoon I’d probably be at another school. At night I’d be coaching at a club and then simultaneously I’d be working on my education. 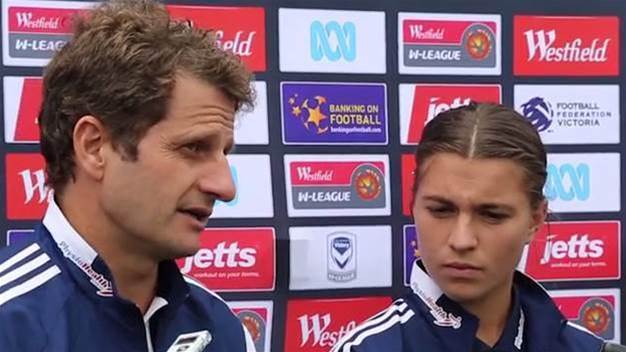 Montemurro addresses the media with Steph Catley in his Melbourne Victory days. Photo supplied by FFV

“Sometimes in between that, the money wasn’t great, I still needed to contribute to a mortgage, so I had to find an external job like washing dishes or making coffees whenever I had the time.

“I was a graphic designer by trade as well, so I did some odd jobs for graphic design as a sub-contractor. When you want to be involved in an industry that isn’t as regulated, you have to make those sacrifices.”

Montemurro added he remembered his beginnings vividly and conceded he wouldn’t be coaching Arsenal today if he hadn’t put in the hard yards.

“Sacrifices, going that extra yard and doing jobs you don’t get paid for is part of what we do and part of that journey,” he said.

“If you study medicine and get a degree, your chances of becoming a doctor is probably better than getting a top job when you have a coaching certificate. 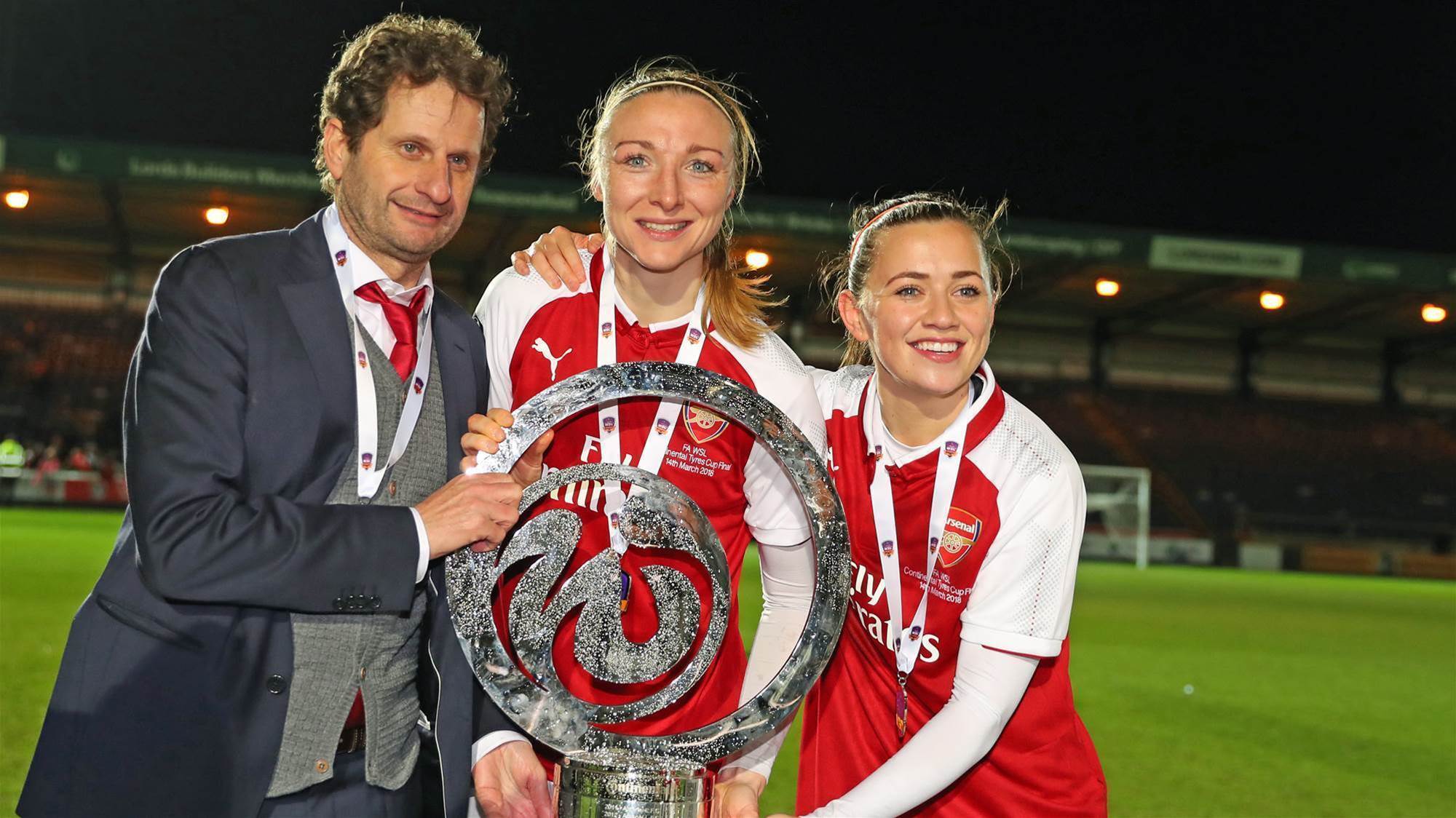 “It’s like pursuing a job in journalism or an art-based profession and the reality is, is that sacrifice comes with those decisions. If you believe in what you’re doing and doing things in a right, honest way, then I think you’ll definitely achieve what you set out to achieve.

“There are different levels and entry points. Obviously having a name as a footballer has an entry point and makes it a bit easier as opposed to someone like myself who had a very moderate footballing career.

“I did a lot of learning and education which allowed me to really become the coach that I am and what I want to be.

“All the experiences, setbacks, disappointments and successes along the way, make you understand who you want to be and you create a real identity of the coach you believe you should be. There were some tough times and I don’t regret any of them.”

Montemurro’s next game is against Everton, who are at the bottom of the table.

Arsenal have retained the majority of their squad from last season, losing four senior players and have signed four experienced European internationals.

Montemurro said 80% of his squad will be playing at next year’s World Cup in France and he added this season was good preparation for the tournament.

Vivianne Miedema, Jordan Nobbs, and Kim Little are among the key players in Montemurro’s squad.

“We’re honoured to have them playing at the highest level for their country,” he said.

“We need to make sure they’re focused on their priorities with the club, but also getting that balance and what they need out of the national teams. 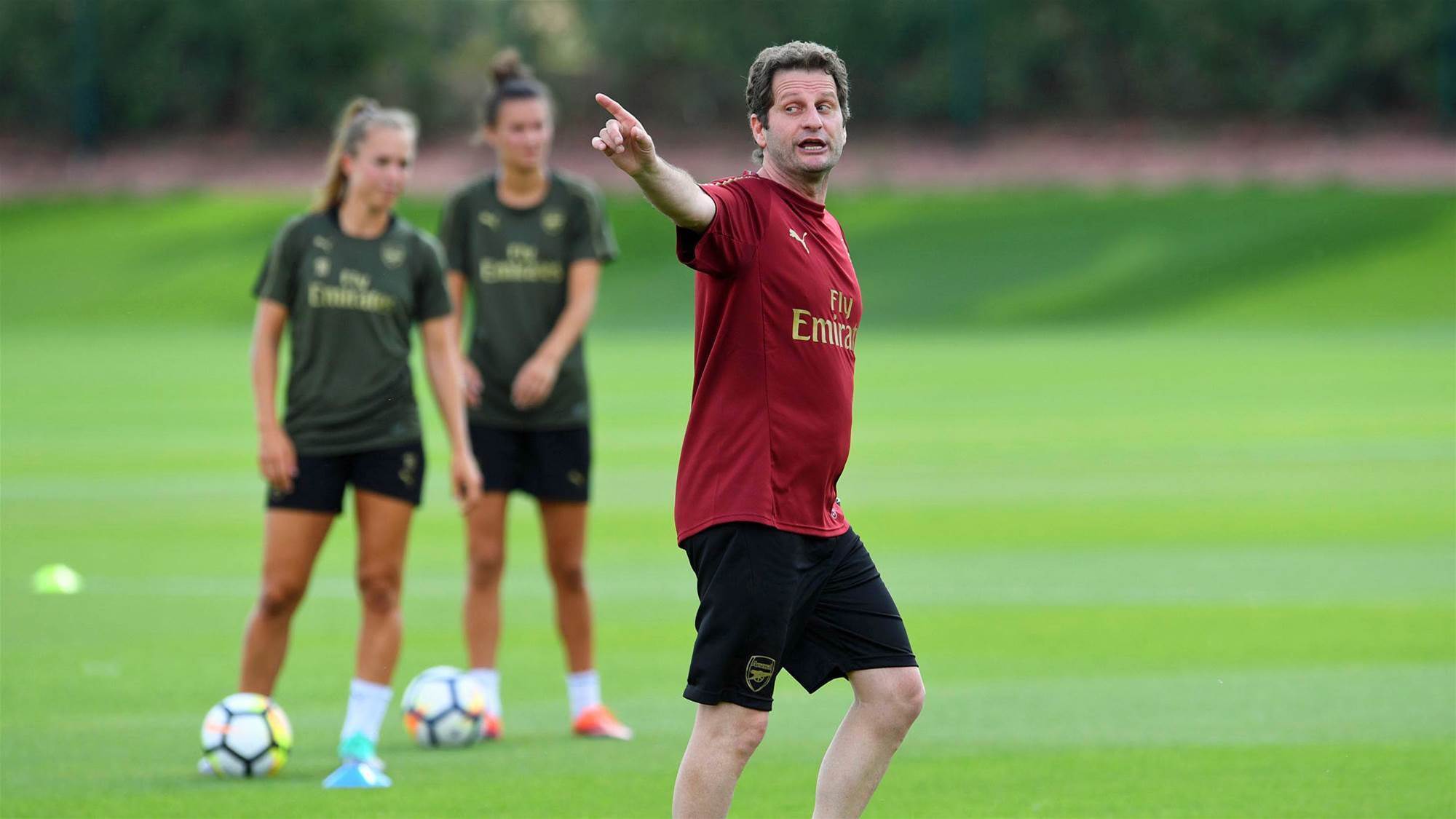 “It’s also good as a motivating factor, they have an opportunity to do very well here in a good league at a great club and then fly off to a World Cup to represent your country.”

Montemurro said he was happy with his team’s performances, but there is room for improvement, despite topping the table.

He credited the players for the amount of goals they have scored this season and was always confident they would have a good campaign.

The man from Clifton Hill added having a proper preseason has played a part in their convincing performances.

Montemurro’s first game in charge of Arsenal was in December last year, as assistant coach Ismael Garcia was in temporarily in charge after the departure of Pedro Martinez Losa.

“We were able to do a bit of base work last year with the bulk of the players which took a bit of time, but the reality is that we’ve had a successful prelude from last season into this season,” Montemurro said.

“You then get the opportunity to start to integrate from day one and it’s always a positive approach when you can bring all your ideas to preseason and do it in the way you believe is best to get the results you need.

“Doing it from day one is always good, but last year was also good in creating the base we needed.”