Ante Milcic insists that Lisa De Vanna remains in the Matildas frame despite leaving her out of the Matildas squad to face Chile.

De Vanna, who sits one cap short of breaking Cheryl Salisbury's all-time Matildas appearance record, was left out of an otherwise talent-packed Matildas squad for the two-game Chile series.

De Vanna has been playing regularly in the Serie A Feminina for Fiorentina, who have struggled at times during the early parts of the season despite the Matildas' solid form.

"Lisa’s in the extended list that I will continue to monitor," Milicic said.

"I know fully what she offers the team on and off the park. For this window I decided to leave her out and bring in other players and have a look at it…to see as many players as possible."

“You have to understand I also have one eye on the qualifiers and the future as well.

“In the back of my mind what really has me thinking is if we are to qualify for the Olympics, it’s 18 player [squads], that’s 5 less than the World Cup [23-player squads] so I really thought about that and that’s also influenced my decision in this squad.”

Milicic is using the fixtures as a chance to take a look at some new faces, with former AFLW player Jenna McCormick - signed to Melbourne Victory - one of the highest-profile potential debutants.

“We’ll really benefit from the time we have in camp and it’s our first international since the World Cup. It’s been a long time and it will be good to get the full squad together,” Milicic said.

“It’s two games, the travel, just being around the environment and preparing for what’s a really busy period and important period for us in January.

“I’m really looking forward to getting the full group together in this camp.” 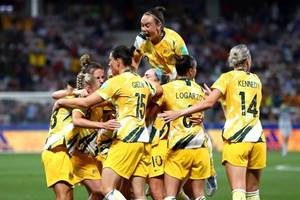 Matildas coach Ante Milicic has selected 18 members of his World Cup squad for Australia's two internationals against Chile in November.

FITNESS: How *Not* to Train

Morri: The parallels of dog ownership and golf

Flyin' Ryan a World Cup bolter from the blue