“It took a lot of persuading in terms of my Mum and her letting me play soccer because she thought it's such high injury sport - although I played rugby against boys so I can't comprehend it,” Gielnik jovially told the Matildas website.

“I had that Dad that was always taking me to every sporting event possible.

“He would watch all my basketball games; all my football games and he was without a doubt that man that is running up and down the sidelines of the game and yelling at you to stop watching the play.”

“I always wanted to be pro one day,” she said “I didn't grow up with those skills or that coaching, I just had my Dad,”

He just wanted to make me better because maybe he could see that I could make it to the top and he knew I could be good.”

Gielnik's set to become one of the first Matildas back in action anywhere in the world when the Frauen Bundesliga kicks off on May 29 and will be staring down a title with Bavarian giants Bayern Munich.

“The success, I will say, is that I came here as a player that the coach wanted," Gielnik said.

"He wanted me because I was that different player but then wanted me to adjust adapt to the German style football and that's not in me.”

“I had to stay true to myself.”

She puts her rapid rise in the football world down to opening her own gym, a move that reduced the pressure and enabled her to fall in love with football all over again.

"After I got cut from the Olympics, I started to realise that I’ve got to do something that makes me happy now and I opened the gym [ShredEm Fitness],” she said.

“Everything just went so well, and I had never been so happy so of course my football just skyrocketed.”

“I wasn't then putting so much pressure about making the Matildas squad or proving myself that stage I was like I got this gym now I'm just going to play W- League enjoy it and love it.”

"Of course I was missing and craving the Matildas, but I stopped putting so much heavy pressure on myself thinking that that's all I wanted. I had the gym and so that created some happiness and some drive for me.” 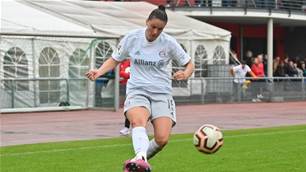