A second-half penalty from Amy Harrison has given Western Sydney a 1-0 win over Newcastle in the W-League at a storm-hit Bankwest Stadium.

A second-half penalty from Amy Harrison was the difference in a game which that was halted for 30 minutes due to stormy conditions at Bankwest Stadium on Friday.

The game marked the debut of American star Lynn Williams, who was easily the best player on ground although her introduction was marred by a disallowed goal.

The Wanderers dominated for most of the contest but grew increasingly frustrated against a stout Jets defence.

Ultimately Harrison's goal was enough to give Western Sydney, who won just one match last summer, back-to-back wins to open their campaign.

"I think the lightning and thunder helped (Newcastle), because they got to regroup and plan how they were going to stop us," said Wanderers coach Dean Heffernan.

"That first 30 minutes by the players was frightening. It was really good to see how well they put together a game."

The Wanderers were on the front foot from the outset, pouncing on the Jets' inability to hold onto possession and making plenty of inroads into the box.

When Harrison was denied by the woodwork inside the opening 10 minutes, it seemed only a natural disaster would stand in their way of victory.

Sure enough, stormy conditions forced the players from the field.

The delay appeared to have only slowed down the hosts, with Williams cheated out of her maiden W-League goal soon after resumption.

The North Carolina forward tapped home a Kristin Hamilton cross at the backpost only to be incorrectly ruled offside by the linesperson.

The Jets were brought undone eventually by a Williams shot that ricocheted into the flailing arms of Clare Wheeler in the 58th minute.

Harrison coolly stepped up to the spot, firing low and left past a flat-footed Claire Coelho to end a W-League goal drought approaching five years. 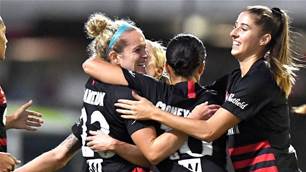 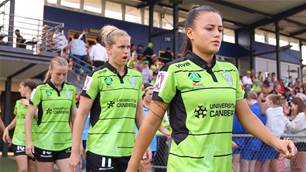 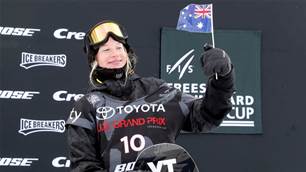