For young 16-year-old Leticia McKenna, the last month has been the stuff that dreams are made of.

Firstly, she made her Young Matilda debut during the recent U19's AFC Championships qualifiers in Lebanon. She came on as a substitute during the 18-0 mauling of Mongolia, and a starting spot in the game against Hong Kong.

Then last week she announced her arrival in the W-League in the most dramatic fashion possible, by coming off the bench and scoring a wonder goal to help her side to an improbable 4-4 draw against Canberra.

HEROIC MOMENT | This is 16-year-old Leticia Mckenna and she scores 🔥🔥 like these on her debut!

The journey to these achievements started when Leticia was six years old playing in the southern Perth suburb of Cockburn.

"It started off (when) I was just filling in for a friends team," she said.

She stayed with Cockburn and eventually ended up playing in their NPL boys teams, before gaining a position as an associate member of the Football West Girls NTC squad.

She then went on to represent Western Australia at U13 and U15 level at the National Youth Championships in Coffs Harbour which is a tournament that many Matildas, Young Matildas and W-League players have played in.

Growing up in Cockburn, she credits her Dad as being a major influence on her sporting development, as he would always take her outside and play kick to kick and is now very supportive of her soccer career.

Having made the jump into the Glory squad, she has remained level-headed and admitted to being surprised to get the call-up to the squad against Canberra. When the team went 4-1 down she was called off the bench by coach Bobby Despotovski and described her feelings at that point;

The goal she scored was a significant factor in the recovery, and the team can now look forward to its first home game of the season on Saturday against Western Sydney with a good deal of optimism.

Leticia described the mood in the squad as upbeat and said the home fans could "expect a lot of positive energy, and a lot of hard working girls because they all want it."

As one of the youngest players in the squad, she looks to the older players for guidance and mentioned that as a midfielder she looks up to Nikki Stanton and Shannon May.

Naturally, Sam Kerr is a big mentor, as well as Katie Naughton and Kim Carroll who give her feedback to ensure that she is doing the right thing for the team, both on and off the pitch.

As far as setting goals for the season, she has already achieved the major ones of playing for the team and scoring a goal but is determined to continue to improve and get a spot in the starting eleven.

If she shows the same sort of form that she did against Canberra, she may well achieve that goal sooner rather than later. 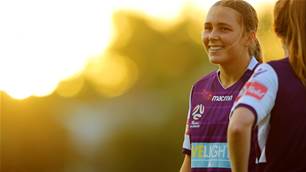