Perth Glory coach Alex Epakis hailed his side's resilience after they blew the race for a spot in the A-League Women finals wide open with a controversial 1-0 win over Adelaide United in Gosford.

Mie Leth Jans scored her second goal of the season when she headed home from a Deborah-Anne De la Harpe corner in the sixth minute to give Perth the win.  Glory's victory means they, Adelaide and Melbourne Victory are battling for the last two spots with each side level on 18 points, although the latter have two games in hand.

After halftime substitute Susan Phonsongkham was sent off in the 62nd minute, Perth had to dig deep with Epakis paying tribute to his side's work ethic.

"We've come up against so many obstacles and you can't even explain what we've had to go through to get that result especially with 10 (players) words don't do it justice.

"This is just us. We're sticking together and doing as best as we can and we lean on that in moments like this."

Perth had some fortuitous officiating to thank for the win after Adelaide's Fiona Worts had an 12th-minute equaliser chalked off for offside.

A massive talking point. @PerthGloryFC were victorious in their @LibFinancial A-League match against @AdelaideUnited.

But Adelaide seemed to have levelled the scores in the 11th minute, but it was ruled out for a controversial offside.

What do you think? pic.twitter.com/NJ66Lw6H5m

Worts tapped in after some intricate build-up play involving Emily Condon and Dylan Holmes and replays showed no reason for the goal to not stand.

But with no VAR to consult, referee Georgia Ghirardello determined that the goal would be ruled out.

"I was aware I might've been offside (but) I looked at the lino and she didn't have her flag up so I thought I got away with it," Worts told Network Ten.

"I had no idea what was going on. I just saw the ball and put it in. (It was) a disappointing night.

"We've got a quick turnaround so we need to put it behind us and put it down as a bad day and go again."

Adelaide seemed to fall apart after that and it took until the second half for them to get back into their rhythm.

Try as they might, they couldn't engineer a chance to draw level, even when Perth were reduced to 10 with Phonsongkham's dismissal.

Phonsongkham was first booked for dissent before a tackle on Holmes meant she was shown a second yellow card by Ghirardello 17 minutes after coming onto the field.

Chelsie Dawber had Adelaide's best chance late on when she fired at goal from a narrow angle, but Perth goalkeeper Morgan Aquino was able to deflect the effort wide. 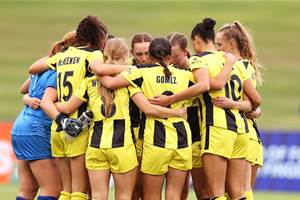 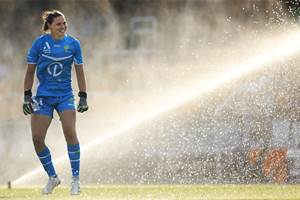