Perth Glory's COVID-19 enforced stay on the eastern states has resulted in a mutual benefit situation for the club and ex-Matildas forward Leena Khamis.

The 35-year-old Khamis has revived her A-League Women career, signing a short-term deal as an injury replacement while the Glory are based in her home state of NSW.

Khamis made an immediate impact as she came off the bench in last weekend's 1-1 draw with Newcastle and is pushing for a start when the Glory face one of her former clubs, Western Sydney Wanderers, at Central Coast Stadium on Sunday.

"The timing just worked out perfectly with the team Sydney-based at least until February or whenever they go back," Khamis told AAP.

"I'm just taking each week as it comes but it definitely did make it easier because I am Sydney-based and obviously I work as well, so that's not interfering with things."

A golden boot winner in Australia's top women's competition, Khamis brings more than 120 domestic top-flight matches worth of experience to the Glory squad -- and is two-time premiership winner, has a champions medal and was a member of Australia's 2010 Asian Cup-winning squad.

With Cyera Hintzen, Susan Phonsongkham and Demi Koulizakis all sidelined with injury, Glory coach Alex Epakis turned to Khamis with the game against the Jets her first ALW appearance in almost 10 months.

"It all happened very quickly but, yeah, it happened," she said.

"Obviously I haven't played at that level for a long time.

"The fitness wasn't where I wanted it to be but I was able to get some minutes in my legs which was good."

Whether her deal turns into something more permanent remains unclear, especially with Perth facing an extension to their time away from Western Australia due to the decision earlier this week by premier Mark McGowan to keep the state's border closed.

What lies next, however, is a game against the Wanderers -- who Khamis played 22 matches for in two stints -- with both two teams hoping to break into the top four nearing the half-way stage of the campaign.

"I'm not hyping it up too much. It's just another W-League game for me," Khamis said.

"Doesn't matter who we're up against.

"I've played pretty much against everyone in the W-League, so for me it's just another game and hopefully I can do a job that Alex and Perth want me to do."

Epakis is set to resume his place on the touchline after missing the draw with the Jets due to testing positive for COVID-19.

The three players who missed the Jets game due to positive tests are now available for selection again. 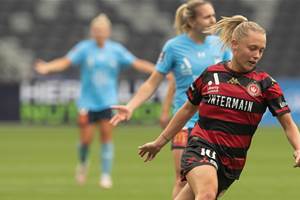 Western Sydney's Libby Copus-Brown says her team must start finding the back of the net if they are to stand a chance of making the A-League Women finals.