Emily Gielnik says she has been "blown away" by her early experience at Bayern Munich and hopes to see more Matildas take on the challenge of Europe.

Gielnik recently joined the German powerhouse off the back of a career-best year, including her first Women's World Cup campaign.

"I think it is massive (for players to test themselves) and I've been told recently to think about my comfort zone and now being 27, it's about time I stepped out of it," Gielnik told AAP.

"Because obviously every year I can play in Australia and live a great life or I can possibly go to America and go to countries that we know we can do well in.

"I think it's quite a big decision when you choose to go to Europe ... because you miss your (W-League) season, you're away from your friends and family for a whole year and it's a big challenge. And it's probably one of the biggest decisions I think I've had to make.

"So far it's only early days, but I think it's one of the best decisions I've made."

There have been calls for more Matildas - especially captain Sam Kerr - to test themselves in Europe.

Gielnik, who has predominantly played in the W-League, said she was relishing the full-time professionalism at Bayern Munich.

"I was told really good things about this club and facility and I actually am probably blown away by how much it's exceeded the expectation of what I thought it would be," Gielnik said.

"The facility is world-class, and I think the first time ever, for female football, it feels like a full-time professional facility, what they've built here for the youth boys and the women's team."

Gielnik won't play for Bayern competitively for a number of weeks as she completes a training block to get up to speed after a post-World Cup break.

She played three games for the Matildas in France, including having a spot-kick saved in the penalty shootout against Norway in the round of 16.

"That tournament was a lot better than I expected for me just in terms of where I've come with the national team - from getting hardly any minutes to playing the majority of the World Cup was a big surprise to me," Gielnik said.

"It was just a nice realisation for me to see how far I've come - but also, it's probably still a bit crazy.

"I still think about that penalty to this day, but a few years ago, I would have never imagined someone like me, and where I was back then even brave enough or technical enough to be in the team and taking a penalty.

"So I have come a long way and if anything it's given me that burning desire to be better and do better if I get the opportunity next time." 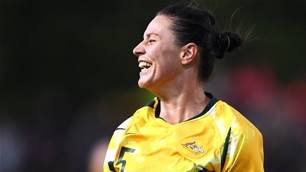