Gielnik scored her team's fourth goal with a stunner from just inside the box in the 72nd minute in a 5-0 win over Kazakhstani Champions BIIK Kazygurt.

Up until now Gielnik had one start each in the Frauen Bundesliga and the DFB Pokal but hadn't yet cracked the illustrious Champions League line-up.

It was her first goal and also the first time she'd completed a full 90 minutes for FC Bayern in all competitions.

Gielnik signed for the German giants in August and has impressed with mostly cameos off the bench thus far. Her performance in the Champions league is likely to see her get a look into the first team in their Frauen Bundesliga match against Potsdam on Sunday.

The 27-year old has 31 caps for the Matildas and will be keen to cement a spot in the starting XI when they arrive back on Australian shores in November for a two-game series against Chile.

Bankwest Stadium sees the Matildas take on Chile on the Saturday November 9th before Adelaide gets in on the action with the return leg on the 12th at Coopers Stadium. 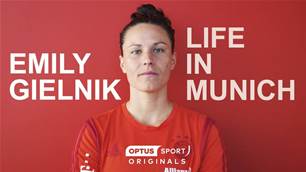