The Optus Sport expert is also a retired Matilda who played 130 matches for the national team, appearing at two Olympics and World Cups.

We spoke to Garriock to ask her thoughts on everything from Australia's defensive depth, the experience and youth in the side and what can be expected.

We had Ante Milicic announce his World Cup squad, what are your initial reactions?

It wasn't surprised with the squad, he took the majority of the players to the States. I think it's a very balanced squad and safe. You can see his purpose for selecting the squad was to have cover in each position.

Here are the 23 @TheMatildas set to represent Australia at the @FIFAWWC in France! #GoMatildashttps://t.co/RVgkwVCR5E pic.twitter.com/QeAa6ud1de

We did see the likes of Kyah Simon left out, who has gone to two previous World Cup but you also had Alex Chidiac and Princess Ibini. Was it a surprise to you that they were left out of the squad?

The biggest surprise was Kyah, given her experience at previous World Cups. Obviously, she still has an opportunity to maybe bring her into the squad if someone gets injured, but for me, someone like Kyah who has produced at many World Cups and major tournaments over the past. I thought that was a big call.

She did get put on as a standby player alongside Kyra Cooney-Cross but both of those players are attacking players. Is it a bit strange that Milicic didn't include a backup defensive player in that role?

I was surprised that there wasn't a backup defensive player given we've got Steph Cately, who's coming back from a calf injury. So defensively you've got the likes of Gemma Simon who hasn't been at any major tournaments.

Teigen Allen hasn't been part of the Matilda's for a very long time so I think our depth in defence, you would pick a defensive player but someone like Liz Ralston that came into America didn't get the opportunity so I'm surprised to see two attackers. 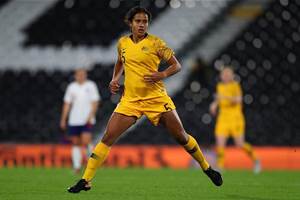 Teenager Mary Fowler has been named in Australia's squad for the Women's World Cup but injury-plagued forward Kyah Simon has missed selection.

Talking about the defensive depth in this side, Ante Milicic has addressed this before including after that game against the USA where they leaked five goals. Do you think that this is an area for concern going into a World Cup?

Yes, I do indeed.

When you concede five goals at any international especially against the USA who is going to be a contender for the World Cup, I do think it's a problem. I think not having the defensive depth is a problem and I think it gives a good opportunity to our keepers who have play time over the past couple of months. Someone like Lydia Williams who's normally a shoe-in to be the first keeper, she hasn't played so I think that's a concern.

There are many players in our Matildas squad going to a World Cup having not player minutes. 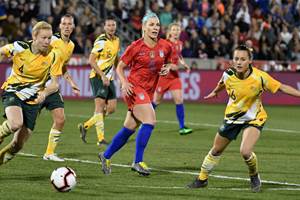 Looking at where the squad is at the moment, who has played and what leagues they have played in or maybe they have not played due to them playing in Future Matilda's? How do they look going into their pre-World Cup game against the Netherlands?

Let's put it this way. This Matildas squad especially the starting XI have been together for many years so in terms of cohesion together, I don't think that there'll be a problem it's more from a conditioning point of view and being able to back up every three days.

So the Netherlands game will give us an insight into the starting XI but for me, I think our biggest weapons are our attack. I think we are so potent in attack that we may leak goals but I think will score a lot of goals as well.