Women’s club Geelong Galaxy United have unveiled a new scholarship program for their senior Reserves team program. There will be 10 spots overall for the 2021 season for the Reserves team who will compete in the newly formed, statewide VPLW (Victorian Premier League Women) competition, the second tier of women’s football.

The Scholarships are a 20-week Program beginning from this week. The Program will be run by fully accredited and NPL experienced coaching staff including the support of the club Technical Director.

Players will train twice a week, with flexibility provided, with a match on weekends. Galaxy will include a petrol allowance as part of the program to help players and parents meet costs.

President Branko Krstevski explained the reasoning behind the initiative, siting the need to rejuvenate women's football in region as a key factor.

"We need to stimulate interest in the women’s game after the impact of Covid last year." said Krstevski. "Our region in Victoria has been particularly affected with a reduction of players returning to sports especially since there was no competition for senior women in 2020.

"The intent of the scholarship program is to help accelerate the return of players to our game. Without a rapid return there is a serious risk that all our Galaxy teams will not be viable and many players may never return to playing football.

"The club continues its commitment to reduce the cost of participation. We have been providing up to three player sponsorships for registrations per season thanks to support of our sponsors and the Kick-Off Geelong Charity Foundation

"The club has secured more sponsors to support this new Scholarship initiative which is targeted at the 16 and older women’s Reserve grade competition. The club is aware of the impact of financials being a restrictor for females participating and want to remove or reduce those barriers."

Krstevski is keen to make Galaxy a destination club for girls and women in the Geelong region, insisting the club has the resources to implement a high level program that will help players reach their potential.

"Geelong Galaxy is the only regional Victorian club playing at the elite football level, JGNPL and VPLW. The club is very serious about preserving this pathway for our regions talented footballers.

"We will continue our work towards maintaining and building on the strongest Female Football Program in our region. Thanks to the generous support of growing sponsor support, several of whom want to remain anonymous, we have the resources to meet our goals."

Galaxy were formed in 2016 to provide an elite pathway for girls and women in the greater Geelong region. The club had much success early on, making back to back grand finals in 2016 and 2017.

Blessed with W-League stars such as Laura Spiranovic, Annabel Martin, Melissa and Adriana Taranto, Galaxy were a powerful force. Former Matilda Laura Alleway was even a guest one season.

The club soon fell on hard times financially, with little support from the local community. However, under former President Rob Lehman, they then turned their focus back to securing local players for their senior women’s team, as opposed to big money recruits from Melbourne.

In 2019 the club was controversially relegated from the NPLW to the VPLW along with Southern United, for reasons other than on-field performance.

The club is striving for promotion back to the NPLW in the coming years.

To register interest, potential participants can contact Branko Krstevski on 0403567553 or email the club secretary at galaxyunitedfcsecretary@gmail.com 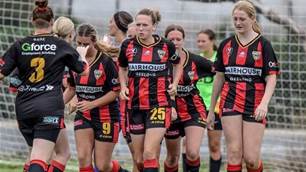