Italian legend and former Matildas candidate Carolina Morace, has coached Lazio women’s team to promotion into the Serie A after a stirring 2-1 win over local rivals Roma yesterday.

Lazio are in second spot in Serie B, eight points clear of third placed Tavagnacco, with two games to play.
They have won six games in a row and are unbeaten in 12 since Morace took over in February with Australian Nicola Williams as her assistant.
Morace admitted she was proud of how her and Williams have managed to turn the teams fortunes around.
“It feel great, we were brought in to get the team promoted and that's what has happened so it is very rewarding,” she said. “I'm proud of the work we have done and the commitment that the players have put in. It is very gratifying.”
Morace, widely considered one of the best football brains in world football, paid tribute to her team for their willingness to listen, learn and adapt to her style of play.
“To get the promotion we had to work with the players a lot. They are not full-time professional and most have jobs so it was to try and balance an increased training program with their own lives and stresses.
“Building relationships with the players was fundamental to understanding how much we could push them and what we could get out of the team. From the beginning the players showed they wanted to do everything to get the promotion because they have been trying for years and came close last year but ruled out due to a COVID algorithm that was used.
“Therefore, whatever I proposed and explained they accepted and a senior player said to me after one meeting when I thanked them for all their effort and positive attitude to the changes made, ‘Coach, we can see how much you have committed and what high standards you have brought with the staff, that we want to do the same and say thankyou to you.’”
Morace’s reign started off with only one win and five draws, before a season defining 2-0 win over Pomigliano away from home kick started their run to promotion.
“It took some time to get the players physically at the level needed to play my tactical style of play, so the immediate matches we didn't win but drew,” explained Morace. “I also needed to see what system would suit the best attributes and strengths of the players.
“Once we got that right it came down to a pivotal moment against Pomigliano who were top of the table. Winning that match was a sign that we were ready and we started to play very good football - and we haven’t looked back. We have the best attack, best defence and the top goal scorer so far.”
Morace still has unfinished business this season as Lazio can still win the league, being only two points behind Pomigliano.
Lazio visit 12th placed Vicenza on Sunday morning before hosting Tavagnacco on the final day of the season on 23 May. Pomigliano take on ninth placed Brescia before finishing the season with a trip to fourth placed Ravenna Women.
While remaining focussed on the task at hand, Morace admitted she was looking forward to Serie A and the challenges that lay ahead for her team. She did stress though the need for her team and her club to be prepared for the major step up into a more professional league.
“Serie A is now going into their 5th year... which means five years of training professionally full time and we have only implemented this for the last three months. Therefore there is a huge gap on physical preparation of an athlete, technical skills of a football player and tactically being able to match that with the speed of a much quicker game.
“Success will depend on how much the club wishes to invest on supporting the players and the team to be able to survive in this league and match the demands of a fully professional side. This involves scouting players, attracting and retaining foreign top players to make a difference to local talent, providing a training hub for players to access medical services, nutrition and gym equipment.
“Now the real project will begin.”
Morace was pipped for the vacant Matildas job last September, with Swede Tony Gustavsson getting the nod.
Many tipped Morace, who scored 105 goals in 150 internationals for Italy over a 19 year career, to get the job. But Gustavsson, who won two World Cups with the USA women’s team as assistant, was eventually chosen.
Prior to her current stint at Lazio, Morace had previously coached them in 1998.
Since then she has managed Viterbese men’s, Italian women’s national team, Canada women’s national team, Trinidad & Tobago women’s national team and AC Milan women. 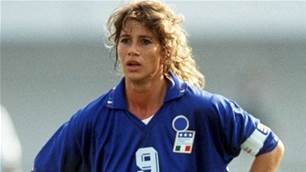