That just goes to show how close this season really was.

“The calibre of players we’ve been attracting from overseas has made the league a lot better,” Kennedy said. “Even just within Australia, the quality of [local] players is getting higher and higher. This season – how close the league was – just proves how much every team is a beatable team and can win on any day.”

That was proven in this season’s semi-final when Perth shocked the league by defeating Premiers Melbourne Victory 4-2 in extra time.

Foord thinks that performance showed just how hungry the Glory are for their first W-League Championship title.

“They’ve been to a couple of grand finals and they’re yet to win one,” she said. “I know how huge that would be for the club and the players and for Bobby [Despotovski] as well. They’ve got a lot to play for, as well as us.

“I feel like all the players in the Grand Final [this season] have a lot of experience being there, so I think it’s gonna be a cracker of a match.”

This may be Sydney’s biggest challenge yet. The Sky Blues have only played Perth once this season, losing 2-1 away from home thanks to a Sam Kerr brace that included a soaring header in the 85th minute.

Kennedy has her sights set on the W-League Golden Boot winner, as well as Kerr’s strike-partner Rachel Hill, who currently leads the league in assists.

“Obviously we’ve got some great players we’re coming up against in Sam Kerr and Rachel Hill, so we’re looking to shut them down,” she said. 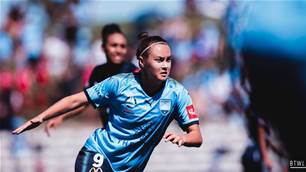