No surprises that Caitlin Foord is relishing having Steph Catley and Lydia Williams on the same side of the pitch after years facing off in the W-League.

Now that period suddenly appears an age ago, and the three are all set to take to the pitch together in the red and white of Arsenal, one of the world's biggest football clubs.

“I've been playing with Steph for 10 years. We've known each other for a very long time, but in a club environment, you see them day in day out,” Foord told Goal.

“I know them pretty good as footballers, but now it's just to get to know them as people. That's something I haven't really had the chance to do.

“It's just good to have them around. They are always two players that I hated playing against in clubs so it's nice to have them finally on my team."

Foord also gave her insight into why the Matildas flood into the Women's Super League has happened so quickly, right now.

“There's a lot of us [Aussies] out here now, I don’t know if there’s too many more to come! If they’re not here in the UK, they’re here in Europe. I think it's good," she continued.

“For the last few years we've been doing seasons back-to-back with Australia and America and I think it's just come around the same time that for all of us it’s time for a change.

“With European football, with the level it’s at and the English league obviously making massive strides as well, I think that was very attractive to us.

“It was a matter of time before I was going to come, I just didn't know when it felt right. This year felt like the right move. Being here now, it definitely feels like that more.” 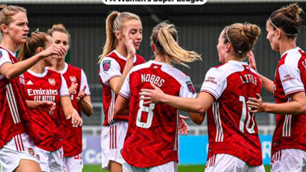