“[Kate] checks in randomly throughout the season now as well. But now I’m like ‘now I’m fine, you don’t need to be calling anymore!’ That comes with playing again and getting confidence and finding the player I know I can be.”

That player has taken a long time to emerge, but Foord feels she is finally starting to get there.

“I started to see glimpses of good play in myself over [in Portland], but it wasn’t until I got back [to Australia] and used it as a fresh start, everything else is behind me, it’s a new season, [that I started improving],” she said.

“I did everything in my power to make myself better.

“I was lacking ability in front of goal, so I started doing extra sessions away from the team, some shooting sessions, which has really helped me. All I needed was the [repetitions], to be hitting the ball one after the other to feel what it was like to hit the ball [well], to take shots and feel confident taking shots.

“[With] Portland, when I should have been taking shots, I was passing it because I was too afraid to make a mistake. So it was getting that ruthlessness back into my play. That obviously came after each game [with Sydney FC].

“I got off to a really good start [scoring a brace], so I was just building off that each game. I honestly just started enjoying playing the game again and stopped [over-]thinking it.”

Now the W-League’s second-highest goal scorer and leading the Sky Blues into their third Grand Final in four seasons, it’s safe to say that Foord has well and truly got her spark back.

Sydney host Glory on Saturday at Jubilee Stadium at 4:30pm. The game can be watched live on SBS, Fox Sports, Kayo, or the My Football app. 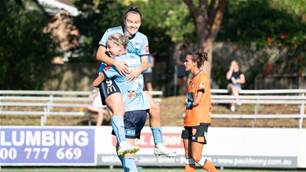 Foord & Kennedy: We can beat anyone