The mathematicians were out in force before the final Group C games kicked off in Grenoble and Valenciennes as the final standings would most likely come down to goal difference.

However, the Matildas were solely focused on the game at hand.

Chloe Logarzo revealed that it was only when the final whistle blew that the Australian bench confirmed that the team had managed to finish second in the group.

“For us, it was just about getting the three points I think that was the most important thing. You can’t really be thinking about that during the game otherwise it will hinder what’s going on,” she said.

What was going on the pitch was enough to pull anyone’s focus as the Jamaican team pulled out all the stops against the Matildas, cutting their two goal lead down to one just inside the second half.

This resulted in a few shaky minutes for the team but they were able to pull it together and retake control of the match.

“We have confidence in our team and it was just about us trying to get rid of our nerves and just play our football and once we started to get composed on the ball we got into some nice positions and Sam did well finishing them off,” Logarzo said. 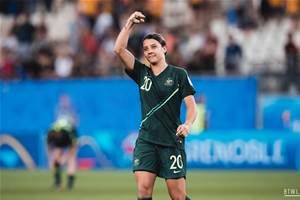 The Matildas are through to the round of 16 after a 4-1 win. Rachel Bach (@bythewhiteline) was there to capture the action.

Vice captain Steph Catley was also singing Kerr’s praises after her four-goal haul and highlighted the team effort that it took to get them.

“She’s a joke, I mean she just shows up doesn’t she, whenever you need her she’s a superhero like that," she said.

"We’re very lucky to have her on our team and in saying that I think that the rest of the players that were out there today did their jobs and you know got the ball to her which is important.” 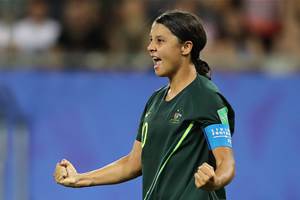 While the win was the result the team wanted Catley acknowledged that there were areas that needed work before the next game.

“[Jamaica] pushed up a little higher and were a little more direct so I think that stretched our lines a little bit so it became a little bit disconnected but that’s on us as well we just weren’t connecting passes, we were missing easy passes.”

However, there were also plenty of positives to come from the game, particularly in regards to set pieces that have proved troublesome for the Matildas in their past two games.

“Our line was decent and we were able to win the first ball most of the time. I think on goal kicks we were strong, winning a lot of headers there, which is so important for us.”

While both players admitted they were disappointed not to have finished on top of the group Catley thinks they can use it as motivation.

“To be honest that’s the thing about these tournaments, they don’t always go to plan and it’s how you bounce back and recover from that, I suppose disappointment is what matters.”

The Matildas will face Norway in Nice on June 22 (June 23 local time).