Roestbakken, 19, was presented with a cap in Grenoble on Saturday (AEST) by vice captain Steph Catley to become the 204th Matilda after coming of age as an Australian international footballer.

And she's also helped swell the numbers of Australia's most famous young footballing family - the Fowler Five - by falling in with the travelling band of support for Mary Fowler.

"Yeah it's the Fowler Six now," she laughed.

Roestbakken and Fowler are friends, most recently touring on the Young Matildas qualifying campaign in Myanmar.

While Fowler was expected to be Australia's young gun in France - and still could be - Roestbakken has jumped the queue on her Matildas roommate get on the park.

The Canberra United defender was originally overlooked when coach Ante Milicic named his squad for the World Cup.

A reprieve came when Laura Alleway was injured in the training camp, and Roestbakken hasn't looked back.

Milicic rewarded the Canberra United defender for fine training efforts with a late debut in the Matildas' 3-2 superb win over Brazil.

"It's been surreal and unreal," she said. "During the game they spoke to me a little bit. We warmed up and I was hoping I would get to go on and lucky enough I did.

"(Two weeks ago) I was just sitting at home on the couch and the next minute I was over in the Netherlands. And now I'm here. It's happened pretty quickly."

Roestbakken could scarcely believe that she was shaking hands with one of her heroes on fulltime.

"I always looked up to (Brazil striker) Marta. She is a great player and she still is," she said. "I used to watch her when I was younger and when I shook her hand after the game, I was like 'woah'."

In a neat display of the Matildas' team culture, Roestbakken didn't hesitate before naming Alleway as the "mother figure" that's helped her the most.

The older defender has stayed on in France despite her foot injury and has been spotted cheering on the Matildas on the stands.

"She's always looked after me," Roestbakken said. "No man left behind, right? 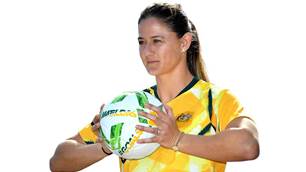 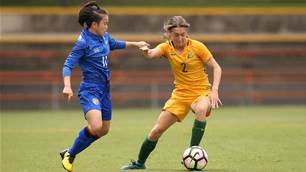