Kyah Simon was warning against complacency as Melbourne City rubbed the Western Sydney Wanderers' face in their championship credentials, running out 5-1 winners to take them into the Grand Final.

"It was a really good effort from the girls and I'm pleased with that," Simon, who scored a brace, said post-match.

"I think we executed our game plan perfectly and it's always nice to score a few goals heading into the Grand Final."

City's dominance over the Wanderers wasn't unique. Rado Vidosic's side have simply impressed their quality more and more as the season's wore on.

After winning the Premiership undefeated, it's hard to think a seemingly more foregone conclusion in recent W-League Grand Final history.

But Simon, a Sydney FC legend herself, knows that anything can happen at the showpiece event, which will likely be played behind closed doors.

"It's key not to have complacency," Simon said.

"We know that there are still areas of the game that we can improve on, we can still score more goals - I know my miss in the first half was one of the misses of the season.

"We know a lot of the Sydney FC players, I spent much of my career in the Sky Blue. We'll do a review of Sydney and see what we're up against, but our priority is to play our own game." 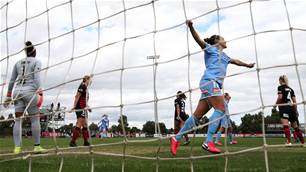