The women’s game has long been the neglected child of Australian football, but today it is the pride of the country.

The announcement we will co-host the 2023 Women’s World Cup with New Zealand has been met with celebrations across the country.

Football fans down-under have long coveted the holy grail of the game - the World Cup - being played on our shores, and the dream will finally become a reality.

For today’s Matildas, life is a far cry from the days of car washes, raffles and lamington drives just so one could represent their country in front of tiny crowds. In 2023, Australia will be buzzing with packed stadiums decorated in green and gold.

Trixie Tagg, who was part of the first women’s team to represent Australia at a major international tournament, the 1975 AFC Women’s Championships, was thrilled to see the games biggest tournament taking place in our own backyard.

“The best news since we won the rights to and successfully hosted the 2000 Sydney Olympics,” said an excited Tagg, who was also the first woman to coach the national women’s team in 1981. “Something I've dreamed of since I watched the Socceroos play with pride  at the 1974 World Cup in Germany.”

Shelley Youman, who played 20 times for Australia in the 1990s, was excited about the significance the announcement would have on the future of women’s football.

“To have the Women's World Cup in Australia and NZ in 2023 is far more than just that,” beamed Youman. “It will put women's football on a pedestal in these two countries, it will give young girls dreams and it will grow the game to a new level.”

The fantastic news comes at the right time for Australian football, which is experiencing some challenging times at present. Falling crowds, sponsors walking out and a loss of TV revenue combined with the COVID19 crisis has left the game in a precarious position.

Today’s announcement is just the boost the world game needs downunder. The governments of Australia and New Zealand have promised their financial support for the tournament, which will allow both countries to build the infrastructure needed to support a game that has long been popular at a community level.

It’s an especially exciting time for young girls and women playing the game.
Melbourne City defender Chelsea Blissett, touted by many as a future Matilda, couldn’t contain her excitement.

”I’m so happy that the World Cup is coming to Australia,” she said. “It’s an exciting feeling to know in three years as a footballer, there is a chance to be able to play in a World Cup on home soil.” 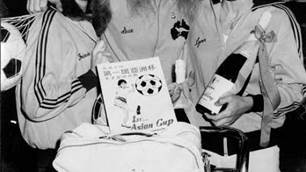