The match between England and Cameroon on Sunday threw up a lot of questions about sportsmanship, behaviour and everyone's favourite piece of technology, VAR.

England came away with a 3-0 win over Cameroon in Valenciennes to book themselves a spot in the quarter-final but Cameroon felt they were hard done by.

"I don't know what you felt as an outside observer or journalist but perhaps you agree with what I saw," Cameroon coach Alain Djeumfa told press after the match.

"Unfortuenly the officials wanted something else from that moment on the girls perhaps lost a bit of temper but I think we need to take our hat off despite the refereeing mistakes, for their performance."

It all started when referee Liang Qin gave England a free-kick inside the box for a passback which led to the first goal for the Lionesses. Replays show that this may have been the wrong call as it appears as the ball was miscontrolled but it set a catalyst for what unfolded.

It was also during this time Augustine Ejangue was caught on camera spitting toward Toni Duggan but despite VAR available for review, which could've been a red card, but she faced no repercussions.

As halftime approached, Ellen White doubled England's lead but her goal was called for being offside. However, VAR stepped in and overruled this decision, which was correct as White was clearly onside from replays.

However, this didn't sit well with Cameroon.

While Djeumfa refutes the following happened, it does appear that his side refuses to kick-off after the awarding of the goal. The 11 players came to the centre circle and had a discussion amongst themselves.

The side was unhappy that the referee didn't check the replay herself on the sideline, but she doesn't have too. 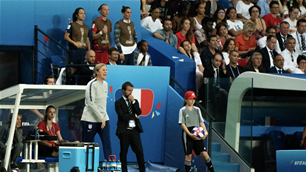