Junior Matildas coach Rae Dower says she's excited to take Australia to our first AFC U/16 Championship semi-final in 10 years, but she's cautious about what's going to happen when we get there.

The Junior Tillies survived a scare against Bangladesh - on paper one of the weaker teams in the tournament - to progress to the semi-finals of the AFC tournament as group runners-up to Japan.

This means the Juniors will most likely face Group B first-placers North Korea in the next round, with the North Koreans barnstorming through their group so far but yet to face South Korea (who have admittedly underperformed) tonight at 7pm AEST.

Given North Korea's excellence at this level, Dower knows the Juniors will have to step it up a notch if they're going to secure a top three berth and qualification to the U/17 World Cup.

"Overall we didn't execute out game plan very well and most importantly the fluency in our passing game was missing. Our passing completion was poor, well down on what this team prides itself on so that is something that the girls are disappointed about," Dower said.

"I am proud though that they kept fighting and managed to come from behind twice to get a point out of the match.  That 'never say die' attitude was on display and with better execution on the ball we can approach the Semi Final with great enthusiasm."

Although she sent the veiled warning to her side, she also congratulated the team on a spirited performance in difficult, humid conditions in Thailand.

"I'm extremely proud of the entire team, staff and players and we're ecstatic to have secured a place in the Semi Finals of the Asian Championship, taking us the next step towards our overall goal," continued Dower.

"It's fair to say that our performance tonight was not our best and there's plenty of room for improvement in all areas.  There's a number of key learning moments to come out of the match for the team and we will take some time to rest, recover, refuel and work on those moments together." 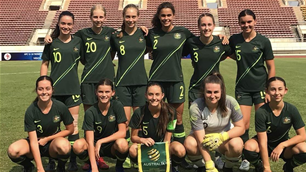