Matilda legend Joey Peters has called on Rae Dower to be the next Matildas coach after Ante Milicic finishes up after the current Tokyo 2020 Olympic campaign.

Peters, who earned 110 caps for Australia, believes that Dower is the type of people manager the Matildas need going forward.
“They are already world class players,” explained Peters. “We don’t need a technical coach anymore, we need a manager.
“They need a manager, not a coach who is going to worry about technical drills. The players are professional now, they have their own club development and that is only going to be more demanding.
“They need someone to bring individuals together over short periods of time, Rae is the closest we have to being able to offer all of that.”
Dower, a W-League championship winning coach, is a well-respected member of the Australian footballing community with over 20 years of experience in the industry.
She has also served on the police force, retiring as a detective sergeant after 21 years in the Queensland Police Service. She was once a secondary high school teacher, emphasising her breath of experience in mentoring and guiding people.
Dower has recently been part of the Junior Matildas and Young Matildas set up, nurturing the next generation of Australian players. She oversaw the Junior Matildas' recent fourth place finish in the AFC U/16 Championships.
“She’s about the person,” says Peters. “Encouraging strong and empowered women. Life values like gratitude and developing personal capacities.
“This is more than about football now, it’s taking women’s sport to the next level. It’s about women empowering women. Her leadership style is empowering others, not her own power.”
Peters insisted this wasn’t about bringing in a female coach, but rather a person who is well qualified for the job.
“We don’t want it to be about gender, but if she’s the best person for the job and a woman, that’s a powerful combination to take the Matildas to the next level in women’s sport.
“Then we can say we are moving forward.“ 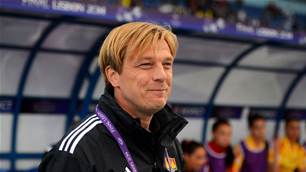 'Who would say no?' Peters backs Gustavsson for Matildas coach