Melbourne Victory duo Natasha Dowie and Keisuke Honda have scooped the October/November PFA Player of the Month awards in the W-League and A-League.

Both players have been central to Victory’s form across the women’s and men’s competitions during the start of the 2018/19 seasons.

Dowie, the 30-year-old English striker, topped off an impressive start to the season, netting on four occasions in November, including an impressive hat-trick in the Big V’s 3-2 win over Sydney FC in Round 4.

Victory’s number 9 beat out competition from within her own team, following the nomination of three other Melbourne Victory W-League players, Laura Alleway, Emily Gielnik and Christine Nairn – and Perth Glory’s Sam Kerr.

Dowie said she was delighted to win the award, following a month of dominance from Victory, who have established themselves as the early W-League pacesetters.

“It’s been a really positive start," she said today. "We’ve set ourselves some ambitious goals for this season and it’s great to see that all coming together on the pitch.

"It’s clear from the other nominations that while this individual honour is humbling, it’s been a real team effort at Victory – and that everyone is sharing the responsibility and setting high standards.

“I’d like to thank the PFA, the players who voted for me, my teammates and of course the other nominees who all could have easily been awarded this accolade."

In the A-League, Keisuke Honda’s immediate impact has been felt far and wide and his position as a nominee came following unanimous nomination from members on the A-League awards committee.

Honda’s life in the A-League commenced with a debut goal in the Melbourne Derby, before the Japanese international added goals against Central Coast Mariners and Sydney FC.

The PFA’s Simon Colosimo visited Melbourne Victory this week to deliver the trophy to Honda at a team meeting at AAMI Park.

“I’m surprised [by the award],” Honda told Colosimo and his teammates. “I’m happy to receive the award, but I am happy more when we win as a team. I appreciate the award and I received it because of my teammates.

“Thank you to everyone who voted for me."

Honda was voted ahead of other October/November nominees Craig Goodwin of Adelaide United and Perth Glory’s Chris Ikonomidis. 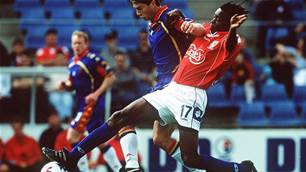