The Diamonds have continued their stellar start to the Netball World Cup, demolishing Barbados 91 - 22 in their first game of Stage Two.

Playing their fourth game in four days, Australia were dominant for the full sixty minutes despite Barbados defenders bringing a tight and physical tussle to the goal circle.

Following a string of inconsistencies in their Stage One games, the Diamonds were incredibly connected throughout all thirds of the court, whilst clinically applying an abundance of defensive pressure.

Australia were quick out of the blocks, dashing to an early 18 point by quarter time, whilst the world number 12 ranked Bajan Gems struggled to keep up with Australia’s swift attacking transitions.

Lisa Alexander continued to experiment with her line-up, which saw the previously unseen combination of Sarah Klau starting in GD, with Courtney Bruce in GK. Yet, the star defenders appeared at home with dominant on-body play causing headaches for their opponents.

The Diamonds capitalised on Barbados’ errors, scoring a hefty 29 goals from turnovers.

The speed of Kelsey Brown and Liz Watson caused the Bajan Gems’ midcourt structure to capitulate, failing to keep up with their strong running leads.

Barbados briefly came out firing in the second half, led by the improved physicality of experienced defenders Latonia Blackman and Shonette Azore-Bruce.

Yet, their increased body on body defence failed to impact the game, with Australia effectively cutting through any such pressure.

Caitlin Thwaites was impressive in her 50th Australian cap, shooting at 100 per cent efficiency. Coupled with the versatility of Gretel Tippett, the pair looked dangerous together in the goal circle, shooting 45 goals in the second half.

Eye of the needle! 🎯

Despite Alexander choosing to change the line-up throughout the game, every combination appeared to click, elucidating the sheer strength of the world number ones.

With that performance, the Diamonds have sent a message to the rest of the competition – their best is to be feared and they are capable of anything this World Cup.

Australia will be back on Wednesday when they face Malawi from 1:45am (AEST). 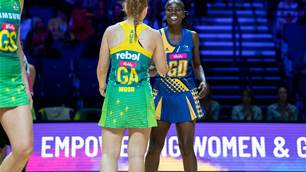