There are so many turning points in Matildas history that sometimes its hard to distinguish between those that really changed the national team's perception, and those that simply changed the players who were lucky enough to experience it.

But it's safe to say that the Matildas first win at a World Cup, back in 2007, sits in the former category.

The Matildas featured a golden age in that tournament, comprising most of the legends we know so well today, but it was, in truth, a 22-year-old's tournament: Lisa De Vanna.

She then backed it up with a world-shocking equaliser against Norway, a 1-1 draw against the former World Cup winners that spoke firmly to the world that Australia was a force to be reckoned with in international football.

The final group stage match was against Canada, De Vanna once again proving instrumental dribbling through the Canadian defence to set up Cheryl Salisbury for another late equaliser - this time in the second minute of stoppage time.

The Matildas had gone from winning their first match at a World Cup to making the quarterfinals, echoing the success of the Socceroos a year earlier and stamping their own mark on world football in the process.

De Vanna didn't finish there, though. She led the Matildas attacking effort in the quarters against Brazil, a heartbreaking, nailbiting 3-2 loss in which she scored again, leaving her with four goals - the sixth top scorer in the Cup.

De Vanna hasn't appeared for the Matildas since 2019, with the former Matildas boss focusing on a select few players during the latter stages of his time in charge.

Now 35, she recently finished her successful spell with Fiorentina and her international career appears uncertain, with Australia focused on the next generation ahead of hosting the 2023 World Cup.

But the role she played in getting the Matildas to the place they are today has clearly never been forgotten.

“De Vanna was brilliant that tournament; that’s when she really took off,” Caitlin Munoz told the Matildas website. “We knew she had that in her and it was so good that she was able to do it at that time.

"It was the same sort of thing as with Walshy: I passed [De Vanna] the ball and was probably ahead of her when I did, then after she scored she went over and celebrated and I had no chance of catching up with her either!

“But that goal was amazing, she really stepped up that tournament.” 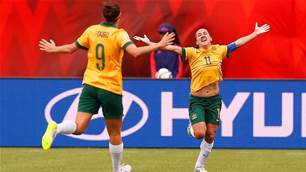