Critics may be heralding the end of Lisa De Vanna's international career after the Matildas icon was again left out of the Matildas' most recent Olympic qualification squad.

De Vanna was a high-profile exclusion from the Matildas recent Chile friendlies at Bankwest and Hindmarsh stadiums, with the 35-year-old veteran a regular starter for Serie A Feminin giants Fiorentina.

While De Vanna has been in strong form this season for her Italian club, Milicic said after the Chile friendlies that he was "fully aware" of what she offered and had a responsibility to look towards the future.

"Lisa’s in the extended list that I will continue to monitor," Milicic said.

"I know fully what she offers the team on and off the park. For this window I decided to leave her out and bring in other players and have a look at it…to see as many players as possible."

“You have to understand I also have one eye on the qualifiers and the future as well.

“In the back of my mind what really has me thinking is if we are to qualify for the Olympics, it’s 18 player [squads], that’s 5 less than the World Cup [23-player squads] so I really thought about that and that’s also influenced my decision in this squad.”

De Vanna is only a single international appearance away from breaking Cheryl Salisbury's all-time appearance record of 151 caps and holding the Matildas' appearance and scoring records simultaneously.

She played a substantial role at the 2019 World Cup, but has faced increasing pressure for her Matildas spot this year due to the emergence of several key young players.

The continual development of Emily Gielnik, who now plays for Bayern Munich, also has hampered her chances. Gielnik, alongside skipper Sam Kerr, were the only non-W-League players to make Milicic's squad.

“We have a great amount of experience in our squad, as well as some emerging talents, and I expect us to perform strongly in Wuhan,” Milicic said.

“Together with my staff I have been keeping a very close eye on the Westfield W-League, and it is pleasing that many of our players have produced strong performances in the competition over the past two months." 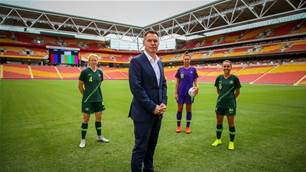 Exactly how Milicic is changing the Matildas