The 29-year-old Australian signed with PSV Eindhoven last July, after a successful W-League season with Melbourne City.  She joined Matildas teammate Amy Harrison, who had signed with the Dutch side in April 2020.

No stranger to playing overseas, after having spent five previous seasons playing in the American NWSL, this was Simon’s first experience with a European club.

The club, which had created a women’s side in 2012, had heavily invested in the women’s game.

Upon her arrival in Eindhoven Simon joined a side who were placed first in the previous season, until the league’s season was annulled due to the coronavirus pandemic.

They had however earned a spot for the 2020-21 UEFA Women’s Champion’s League.

This past 2020-21 season was a hotly contested and turbulent one for PSV. The team finished just one point behind Eredivisie champions FC Twente.

This was achieved despite a period of the year where half the squad was sidelined with COVID and a later managerial change.

In the Champion’s League the club was unlucky, getting selected to play against eventual winners Barcelona in the Round of 32.

Simon’s personal season was also unlucky. A calf injury prior to the first Barcelona game kept her from play for nearly two months and took away her chance at getting her first taste of European football.

Then upon return from the Christmas break Simon required surgery on her ankle, further sidelining her for nearly four months.

Simon did eventually return to play in May.  She scored a goal in her second match back.  In total she played seven matches in all competitions.

However, Simon did leave PSV on a high.  The women’s team won its first major trophy for the club this past weekend when they brought home the Dutch KVNB cup.

When announcing her departure, Simon posted the following message on her Facebook page:

“To PSV, The Staff, Coaches and my Teammates, Thank you for this past season and welcoming me into your football family. There’s been some highs and lows, and everything you could imagine in between, but no matter what we stuck together and were able to lift the club’s first ever trophy.”

“To Sandra and Rick, thank you for giving me the opportunity to play for this great club and to be a part of history, I wish I was able to contribute more on the pitch, but unfortunately that’s football sometimes.”

“To the fans, thank you for your support, we missed you but I’m so glad you could join us for our final few matches (football really doesn’t feel right without you all!)."

“Another football chapter ends, but I leave with great memories, friendships, some Dutch words, and a whole lot of PSV love From the bottom of my heart thank you, I can truly say that I’m leaving a better person from this experience. The football journey continues…”

Simon has been called up to the most recent Matildas squad for the upcoming friendly matches against Denmark and Sweden.

This will be her first appearance in the green and gold since prior to the pandemic.\

In other news, Simon and Amy Harrison were part of the winning PSV side who brought home the Dutch KNVB Cup this past weekend.

Both players signed for Dutch side PSV Eindhoven women last year.  In doing so the former Melbourne City and Western Sydney Wanderer players became part of a team filled with Belgian, Mexican, Portuguese and Dutch internationals.

Harrison’s 2020-21 season was more consistent than Simon's. The midfielder saw the field twenty-three times for PSV.  This included two starts in the UEFA Women’s Champions League.

Harrison is also headed for Matildas duty. She's been included in the Australia squad for the upcoming Danish and Swedish friendlies and are vying for spots on the Olympic roster. 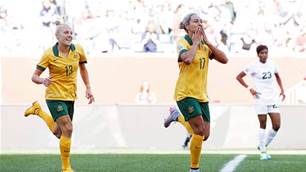