The “spygate” which broke out at the FIFA Women’s World Cup on Monday has been addressed by both USA and England coaches.

The incident which has also been dubbed 'hotelgate' came to light after The Guardian reported US team officials were caught wandering into private rooms at England’s hotel on Sunday morning while the team were out training.

US coach Jill Ellis has played down the incident saying her colleagues were scouting out the hotel where the winner of the semi-final match between them and England would stay ahead of the final.

"I assume everybody's doing that, you have to plan ahead," Ellis said.

"The only two people that think planning ahead on my team is my administrator -- she has to book all the flights and everything -- and her boss.

"And everybody else, they don't worry about that. That's probably who the two people were. It's important to do your job."

The Football Association is understood to be furious over the incident and claimed that it would never scope out another team’s hotel.

"The only thing I will say is that it's not something I want my team ops person doing," Neville said.

“Jill Ellis wouldn’t have been happy and nor would I have been and I am sure she will be dealing with that infrastructure within her discipline.

"We were training so I hope they enjoyed the hotel."

When asked if it was an unfair advantage by a reporter in the pre-game press conference, Neville quickly replied and also saw the humour in the incident.

"It's not an unfair advantage, it will have no baring on the game, I actually found it quite funny, I just thought 'what are they doing?'," he said.

It will be England's third semi-final at a major tournament having made this stage four years ago in Canada and again at the 2017 European Championships.

"I've told the players it's something they should be incredibly proud about, that's consistency at the top level," Neville said.

"I think the work, the investment the FA have put the leagues and into our squad means there is a sustained period of success here."

The United States and England come face-to-face on Wednesday morning (AEST) at 5am in Lyon.

Watch the game LIVE on SBS and Optus Sport. 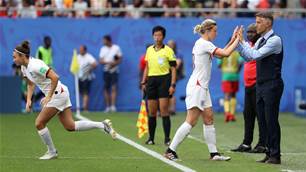