Melbourne City have released details of their new-look squad for Season 11 including two new Matildas – with the promise of more signings to come.

City have also strengthened in attack with the arrival of former Western Sydney Wanderers forward Helen Caceres and ex-Adelaide and Newcastle striker Adriana Jones, who will provide Vidosic with additional firepower in the final third.

“We’ve secured a number of top-class new signings that will add to the quality the returning players have demonstrated these past few seasons,” said Vidosic.

“We all know the quality Tameka and Elise can bring to the team following their many successful performances for the Matildas, particularly during the 2018 AFC Women’s Asian Cup."

With almost 100 Matildas caps, Kellond-Knight promises to add further steel to City’s midfield. The two-time FIFA All Star Team award-winner (2011 and 2015 FIFA Women’s World Cups) most recently played in Europe for 1. FFC Turbine Potsdam before moving on to Hammarby Fotboll in Sweden.

Teaming up with Kellond-Knight in midfield, Butt adds creativity and goals, having notched up an enviable scoring record since her league debut in 2008. Winner of the Julie Dolan medal in the 2013-14 season, Butt has featured for Australia 67 times as well as playing her club football all over the world, including in Germany, Sweden and USA.

Championship winning captain Catley and Matildas star Simon return to City following the close of the US National Women’s Soccer League, hoping to make another big impact in pursuit of the club’s four-peat.

A key member of City’s back four, Catley has been with City since their maiden W-League campaign in 2015 - making 41 appearances and winning three titles along the way. Catley has also earned 67 Matildas caps, playing a major part in captaining Australia to runners-up in the 2018 AFC Women’s Asian Cup. 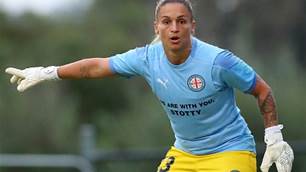 Stott to return to W-League with Melb City