Matildas midfielder Alex Chidiac says rankings won’t mean much when they lock horns against South Korea, Vietnam and Japan in the 2018 Asian Cup in Jordan.

The Matildas arrived in Amman on April 1 and look to take on South Korea on Sunday morning, 3am (AEST).

Australia had a positive send-off game when they downed Thailand 5-0 in Perth last week as Chidiac opened the scoring, getting her first goal in the green and gold.

Never has there been so much scrutiny and pressure on Australia to take home a trophy as the Matildas are the highest ranked team in the competition at No.6 in the world.

However, Chidiac felt they would match up well against their opponents.

“We’re not worried about rankings, it doesn’t really mean anything when we go into a tournament like this,” Chidiac told The Women's Game.

“We just want to go out and take each game one at a time and hopefully bring home the trophy.

“We try not to think about it too much, we just want to play our game and work towards what we’ve been building for the past couple of years, so hopefully it’ll all come together.

“South Korea and Japan are definitely a good challenge, every team here has quality. We’re not worried about the opposition, we just try to play our game and if we do we have the confidence we’re going to win the tournament.

“I haven’t been to Jordan, I’ve been to Abu Dhabi with Melbourne City and that’s similar to here, but it’s cool so far.”

Chidiac also described her maiden goal for the Matildas as an unbelievable feeling.

The 19-year-old who is of Egyptian and Polish descent was cutting her teeth early when she won the 2016 W-League Championship with Melbourne City.

Chidiac who came through the Young Matildas set-up will also have fond memories of being involved with the seniors in the 2017 and 2018 Algarve Cup.

The Adelaide United star felt her hard work has paid off and now holds the privilege of wearing the No.9 jersey in place of the injured Caitlin Foord at the Asian Cup. 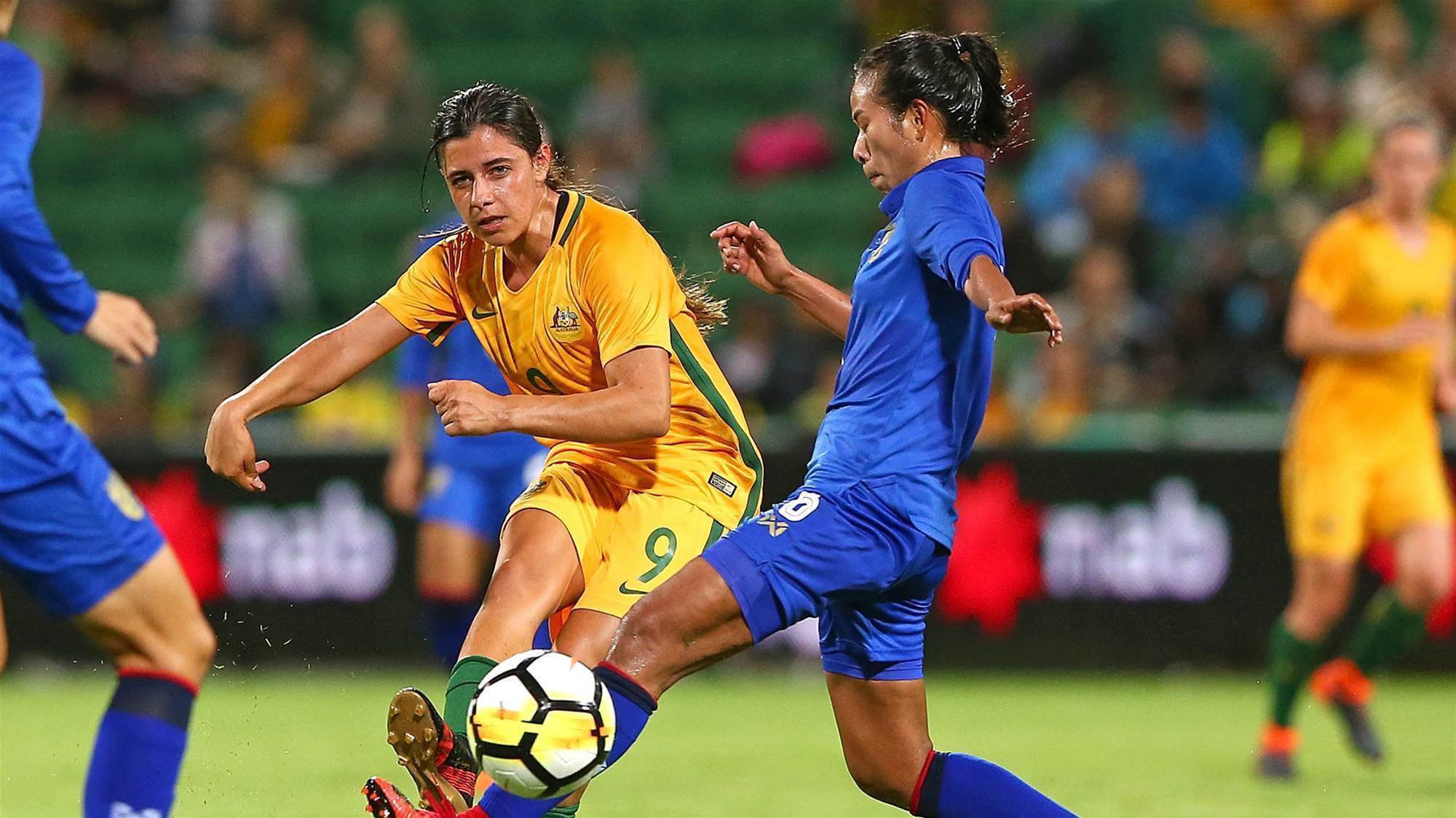 Chidiac in action against Thailand

“I can’t really describe it (the goal), it’s a surreal feeling, very unexpected too and I’m really happy,” she said.

“It definitely gives me confidence, getting a start and the more minutes I get, it just builds.

“Being with the seniors is a lot different from being in the Young Matildas and the experience I get, it’s great to be around the girls, I’ve had so much experience at that level.

“One of my mentors I’ve had for a while is Aivi Luik, I’ve known her since Melbourne City and she’s always been someone I could call if I had any football problems or life problems and she’d help me out.”

It was reported in the beginning of February, Chidiac was in talks with a number of European clubs, however, Chidiac said nothing was concrete just yet.