Matildas star Steph Catley says next year’s Women’s World Cup in France is the stage to prove that Australia can be among the best teams in the world.

After beating the USA and a number of other top ranked nations, the Matildas reached their highest ever FIFA ranking of fourth and their aspiration to be number one was made public.

To achieve this goal the Australians were desperate to qualify for the 2019 World Cup and after winning through to the semi-finals of the Asian Cup the Matildas booked their ticket to football’s biggest show.

Catley told FourFourTwo that France will be the perfect opportunity to showcase their football credentials on the world stage.

“The team has worked so hard in the last couple of years to be where we are at. France is where you really prove that you are a world class team, that you are one of the best teams in the world.

“It’s great for women’s football and for all the little girls aspiring to be Matildas.

“For them to be able to watch us play against the world’s best is not just important for the group but for the women’s game - for them to aspire and dream to one day wear the Matildas jersey.”

Catley admitted that the Matildas’ recent success means they are no longer the hunter but the hunted.

“Obviously that is new for us,” she said.

“We’ve always been the kind of team that has been the underdogs when we’ve gone into major tournaments.

“We have had big results against big teams but when we are here we focus on the teams that we are playing against like Japan in the final.”

With the two previous Asian Cup matches against Japan and Thailand seeing Australia fight back with late equalising goals, Catley said it highlighted a new quality the Matildas have added to their game.

“The most important thing is that we have found a way to get a result, no matter what, in both of those games and that is something I wouldn’t have said in the past,” she said.

“Playing in that Thailand game, it was so difficult as they sat back and transitioned a couple of times.

“It was a great learning experience for us to further our experience coming into future major tournaments and I’m expecting us to bounce back quickly against Japan.”

Ahead of the Asian Cup Final, Catley said the Matildas would be taking in a measured approach against one of their biggest rivals.

“It’s important not to be too confident but to also have the right amount of confidence when we are playing against a team like Japan,” she said.

“They are so amazing on the ball. They are very technical, and have smart players, so you really have to be on your 'A' game.

“It’s really exciting that this is our third final in a row. A couple of girls know what to expect from this situation but there are a lot of girls for whom this is new.

"It’s going to be a really good game and we are really excited.” 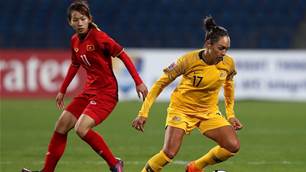