Canberra United have started the All Ability Academy to provide a professional level of training and skills-based football opportunities to people in the ACT with disabilities, the first of its kind in the state.

The program is available for all ages and genders, with footballers currently ranging from 10 to 44. There are real lights at the end of the training tunnels as well, as the academy prepares players for competitions like the CP Football Nationals and FFA National Futsal Championships.

It's also believed to be the first such academy to be linked directly with an A-League or W-League club.

It's another huge accomplishment by the W-League club and the Capital Football organisation, who have long punched above their weight in the national competition and now look set to add an A-League team to their ranks in the next wave of A-League expansion.

For the footballers themselves, like 15-year-old Luc Lander, the program is the next step along the road to realising his football dreams.

"It was quite annoying when COVID came along because I thought I would be able to realise my dreams. That has just been delayed by a little bit. I will come back stronger."

The program is thanks to Capital Football's game development manager, Kelly Stirton.

"I saw there was a need to create pathways for people with a disability," Stirton said. "There is not too much out there for them."

"It is all about managing them during a game, preventing injury, making them fit for games and building their skills.

"They are the same as us. Even though they've got a disability, it doesn't mean they can't go out and achieve a goal. So that's what we're trying to do."

'Relief off my shoulders' with Canberra's three local signings 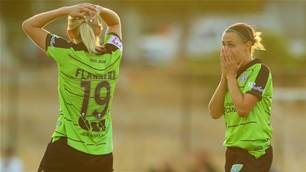