Canberra United and Melbourne Victory played out a 0-0 draw in wet conditions to bring the W-League regular season to a close.

Arriving at McKellar Park on Tuesday night, the crowd and the players were greeted by similar conditions from the last time these teams met with lightning and rain all around. After a 30 minute delay the match did kick off and the fans watched an entertaining match of football in spite of its lack of goals.

Having already finished Premiers and with a home semi-final on Sunday to prepare for, key Victory players Natasha Dowie, Christine Nairn and Emily Gielnik started the match on the bench.

Ashleigh Sykes started for Canberra United and Ellie Carpenter was a late withdrawal from due to illness with Taren King taking her place in the starting line up.

Melbourne started strongly with some good play by the midfield only for Ayres to be caught offside. Unfortunately, Lia Privitell was injured in a tackle early in the match and had to be replaced with Gielnik entering the field in the 15th minute. 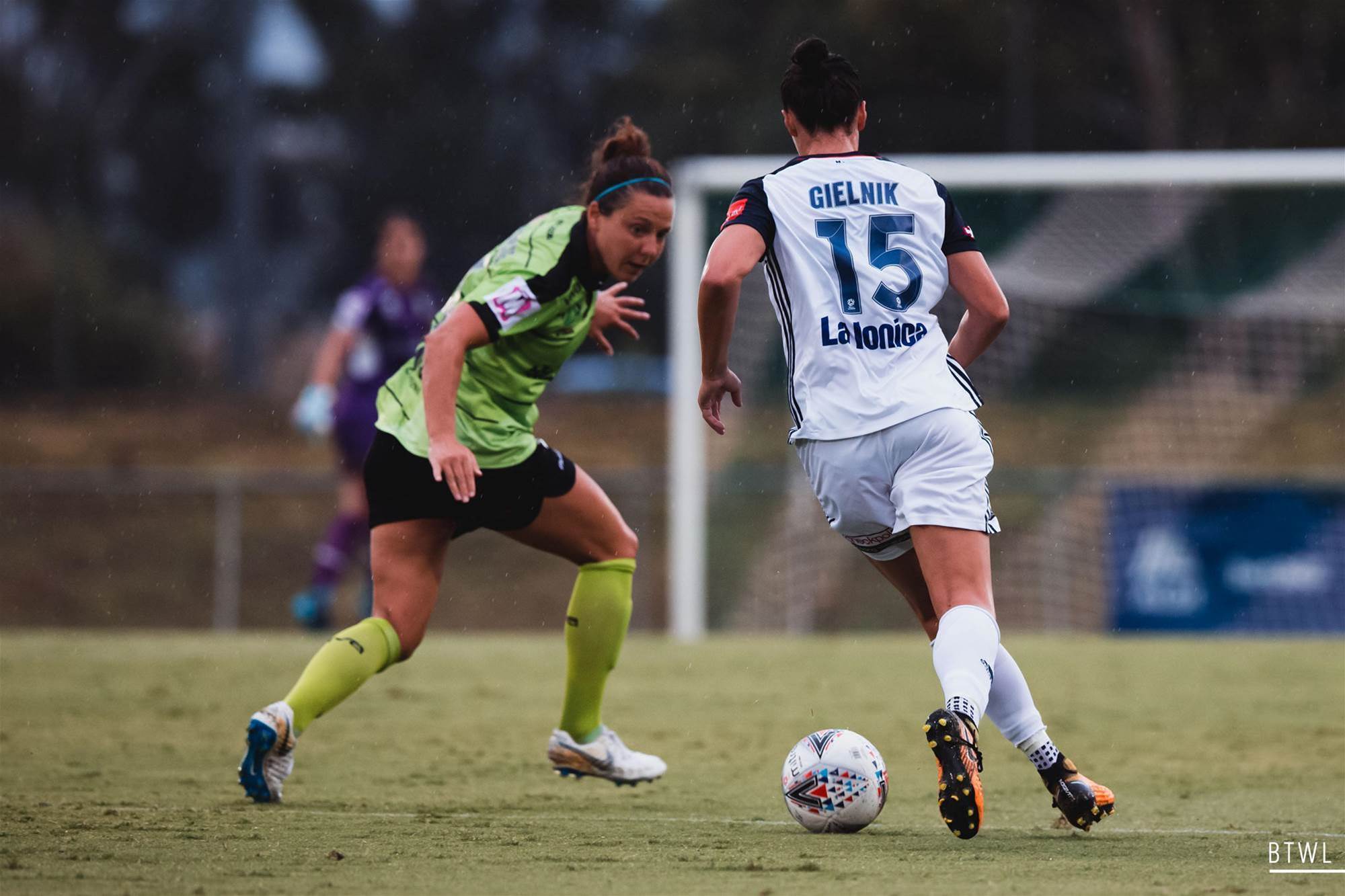 Canberra started to take control of the half with a few shots on goal including a header by Rhoda Mulaudzi following a great cross from Sykes and Jane taking a shot from distance. The Canberra defence was also working hard to contain the Victory with some great defending by Rachel Corsie. Neither team really tested the keeper in the scoreless first half.

With the rain coming down the players took the field for the second half. Again Canberra had a number of attacking opportunities but were unable to really challenge Casey Dumont. The match opened up with both team trying to score the elusive goal and Canberra brought on Rojas to assist with their attack.

Canberra had the best chance of the match when Rosie Galea shot from range hitting the crossbar. Nairn and Dowie entered the match for Victory in the last half hour of the match and while their presence clearly lifted Victory, and created some great combination play they were unable to get any clear shots on goal.

The Canberra crowd were willing a goal to materialise as the cheer went around the stands and Olivia Price almost delivered only for her shot from distance to be stopped by a great save from Dumont. Dumont pulled up quickly after the save and was holding her leg, but coach Jeff Hopkins had no concerns in press afterwards.

At the end of the match, Victory were awarded the Premiers plate by Greg O’Rourke with their focus now moving to Sunday semi-final against Perth.

Victory captain Natasha Dowie spoke in press of the opportunities a rest for her brought for others in the side.

“I think for us it was a bit of a strange game, obviously having won the league, but I think it was a great opportunity for players that have worked so hard throughout the year and maybe not got as much game time to be given their opportunity. You look at Alex Gummer, she hasn’t travelled with us this year, and she had a great game at left back today.”

“For players who had a lot of games, it was probably nice. I want to play every game but it was nice to get a little bit of a rest. Now, where hopefully everyone’s all pulled up fully fit and we can focus fully now on the Perth game.”

Hopkins was also impressed with players on the longer list being able to perform.

“I think for me, it’s credit to our depth that we’ve got in the group.

A credit to the girls that came on, our back four I think was magnificent. We had two players playing in a position they’d never played before. For me, most probably the happiest thing was that that didn’t really faze them at all. They just got on with it, and played the game.”

Dowie paid tribute to the togetherness of the Victory side, and how it resonates with players all across the park, and the bench.

“We’ve all got each other’s back and we all want each other to do well. I think that gives players confidence when they go onto the pitch that even if they are nervous they know that they’ve got another ten people behind them and on the bench supporting them.”

Though the draw was bittersweet, Canberra captain Rachel Corsie found a lot of positives in the match.

“I think it says a lot that a game that could easily not mean much, for us to go out and dominate the team who’ve been champions, who’ve been the best team consistently this year. It shows a lot of courage.”

A wry smile on Corsie’s face gave nothing away on whether she’s started thinking about Season 12 in the W-League.

“It’s a busy year for me, I have thoroughly enjoyed my time here. It means a lot to have been a part of this club. I would love to come back and continue the work that’s started. It’s a short season, and we’re just beginning. I think Victory is a prime example of that, they’ve had a consistent team over the last few years and it shows how much that can have an impact on the field. We want to build a culture at this club where it feels like a home. And we want to become that team that’s unbeaten and finish on top.”

Coach Heather Garriock was again left feeling like the draw -Canberra’s fourth this season- was a loss.

“The story of our season. Possess the ball, play great football, just the final third – we can’t score.”

“I think we’ve addressed some things throughout the season, but I think a big thing is just being able to start the game, and get a goal up, and then build momentum.”

Canberra’s last match is a good reflection of their season: lots of opportunities but not quite able to make the most of them. If Canberra can keep the playing group together they have set a good foundation for next season.