Helen Caceres (nee Petinos) is enjoying her football with Melbourne City after a long break from football.

Caceres is hopeful of starting on Friday night’s standalone Melbourne Derby at AAMI Park which begins at 7.30pm.

The 25-year-old spent five years with Western Sydney Wanderers, but arrives at Bundoora with husband Anthony, who plays for City’s A-League side.

Caceres played the full game in their opening round 2-0 loss to Canberra United away and was substituted off at the end of their 3-1 victory over Sydney FC last week.

Anthony returned to City after a spell with Al Wasl in the UAE as Helen spent time with him there. The pair got married in June.

The City utility said she was feeling sharp, despite being having a year out of the game and was enjoying Anthony’s company in the workplace.

“It’s cool, I don’t think there has been a husband and wife at the same club,” she told The Women’s Game.

“It’s good, we kind of keep our distance at training so that we can concentrate, but it’s lots of fun.

“I was completely out of football for a year, I moved to the UAE for the year and that’s basically what I was doing.

“I’m very honoured to have started and played full games, I wasn’t really expecting that coming in from a year off because I know there are some really talented girls in our team. I’ve taken the opportunity, I’ve put 100% into every game and I’ve really enjoyed it.

“City have been a big change, especially having a year off last year. They’re a great club. You know the coaches and staff know exactly what their job and roles are.

“They have been putting us girls through our paces and getting us ready for the season, so I can’t speak higher of the club.”

Caceres added her teammates are on their toes this week because of how unpredictable their starting XI could be in Friday’s derby.

City had three players compete in Australia’s back-to-back friendlies against Chile in New South Wales in the past week.

Among them are Elise Kellond-Knight and Tameka Butt, who are both returning from stints in Europe. 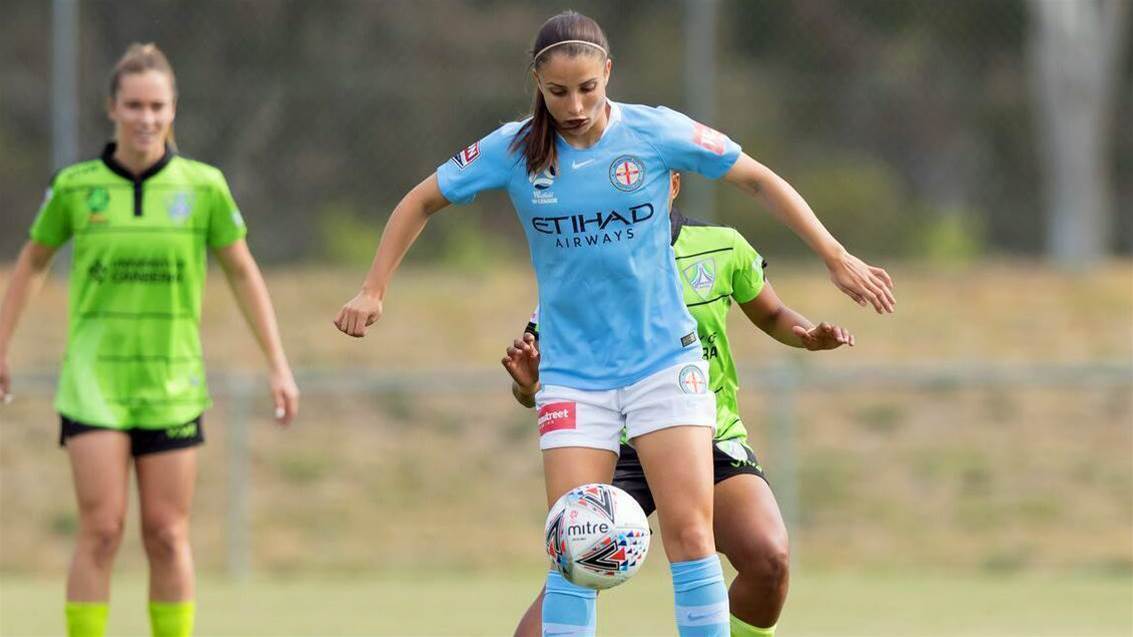 Caceres in action against Canberra United in Round 1. By Ben Southall

Goalkeeper Lydia Williams is the other player who is likely to return to the big stage.

Caceres praised the depth in City’s squad as coach Rado Vidosic has been forced to blood youngsters in the opening two games, due to injuries and late arrivals at the club.

“It’s definitely hard to gauge who’ll play especially with some of the girls in the Matildas squad,” she said.

“I think they come in today, so sometimes you’re not sure. We’ve been training with the team for the week, but it can change any minute.

“Honestly, our team has huge depth and I think it shows that anyone can fill in. Everyone knows their roles and their responsibilities for the game and it helps to be all on the same level.”