The Brisbane Broncos have continued to build their inaugural NRL Women's Premiership squad signing four more players on the eve of the State of Origin.

I’m very excited to announce that I have signed with the @brisbanebroncos for the 2018 Women’s NRL premiership! Can’t wait to play with a very talented bunch of girls! What an exciting time in women’s rugby league!! 🏈🏈#womensrugbyleague #womeninleague #samegameourway #rugbyleague #brisbanebroncos @wrugbyleague

Veteran prop forward Hancock made her Australian Jillaroos debut in 2003, and has played in four World Cups for Australia.

The 36-year-old postponed her retirement to play in the NRLW Premiership and will is set to make her 14th appearance for Queensland in tomorrow night's State of Origin.

Lenarduzzi made her debut for the Jillaroos and represented Queensland in the Interstate Challenge in 2017. 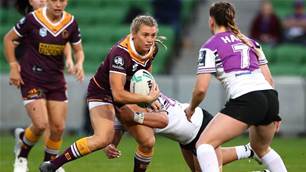